The Sports Archives – LASIK In Baseball!

Posted on June 19, 2013 by thesportsarchives

You might’ve heard your friends and relatives talking about LASIK, but it’s now a popular procedure amongst athletes. Since LASIK is an eye surgery that is usually done on patients with poor vision, it only seems natural that everyone from your co-workers to your favorite sports icons are willing to undergo the procedure.

If you’re not already familiar with LASIK, it is a surgery that is aimed at correcting one’s eye vision through the use of a laser to reshape the inner cornea. A lot of sports personalities have embraced the surgery over the recent years and although it has been proved to play a role in stimulating the performance of the players, it has evidently been proven to improve one’s eyesight thereby enabling them to perform better. The surgery has especially been beneficial for professional baseball players all of whom have responded positively to the treatment.

One of the most notable professional baseball players who has greatly benefitted from LASIK surgery is Greg Maddux, whose had an illustrious career with the Chicago Cubs, Atlanta Braves, and most recently, the Los Angeles Dodgers. Greg Maddux, or “Mad Dog” as he’s often referred to, had been for a long while experiencing poor vision. He eventually decided to undergo LASIK. His operation was on a Monday and he was already back on the field on a Wednesday. On the same day, he was able to pitch a one-hitter despite having only had 0-3 six starts during the entire season. Since the surgery, he has further been able to win 9 out of 10 games.

There have also been many more baseball players who have had LASIK surgery, and just like Greg, they too have shown excellent recovery of their diminishing visual capabilities. These baseball stars include Jeff Bagwell, Jose Cruz Jr., Mark Redman, Fred McGriff, Wade Boggs, and Larry Walker among others.

The Importance Of LASIK Surgery

Although there has been substantial positivity coming from people, especially baseball players, who have undergone the surgery, the important thing is to ensure that one first consults with their doctors before undergoing the surgery. This is because the procedure is mainly intended to cater for those with poor eyesight and if one has quite good eyesight, then the procedure may be deemed as being irrelevant and inefficient.

However, players who have to wear contacts all through their games could seek LASIK surgery. As it has been found out, despite having the contact lenses as being somewhat effective, they are quite cumbersome especially when on the field. An example is when one is playing in a dusty field or when there seems to be quite a lot of wind. To avoid being a liability in the field, LASIK is recommended. Indeed, since the coaches are the team’s eyes, they should be the ones to encourage the players towards embracing the idea of undergoing for a LASIK surgery.

There are quite a number of benefits that one is represented with once they have undergone a LASIK surgery. This includes the fact that the whole surgery takes less than 30 minutes. Also, over 95% of the people who have had the surgery have stated that they were satisfied with it. LASIK also saves patients from any future risks that are common in other types of surgeries. An example of such a risk includes visual impairment at a later stage. Finally, LASIK has proven to be highly effective. 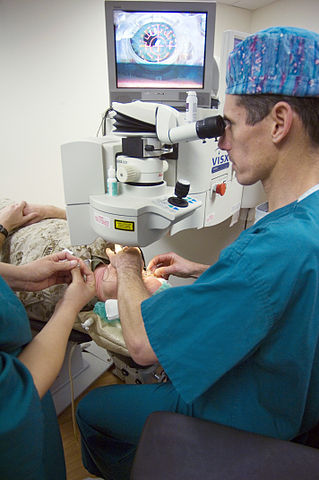 LASIK surgery has come in handy for many people across the nation, and even around the world, especially among baseball players. This has enabled them to maintain and even improve their performance in the field, which was never been the case before. LASIK surgery has further enabled them to remain confident in themselves and not feel the urge to retire early, hence making the game more thrilling. Moreover, the surgery is 100% safe, fast and effective. It also costs much less than other surgeries, enables one to lead a contact lens-free and eyeglasses-free life and also, helps in correcting various eye problems such as far and short-sightedness, as well as astigmatism. Most importantly, these benefits aren’t only available to baseball players. Just about anybody can have LASIK surgery and start seeing thing better quickly.

1 Response to The Sports Archives – LASIK In Baseball!