Posted on January 15, 2013 by thesportsarchives 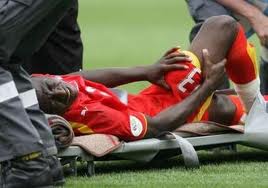 Portable ultrasound machines in sports are new and have taken over much of the workload x-ray machines used to carry. Before x-ray machines doctors had two ways of examining an athlete’s body: by touch and how the athlete responded in pain. X-ray machines gave the doctor a view internally, but were limited to bones, for the most part. A football player on the gridiron for Notre Dame in 1934 who suffered a broken bone had the misfortune of having either their bone re-broken to be set properly, or had to go about in a cast without knowing the extent of the damage surrounding the bone, which could lead to greater complications immediately or later in life. Now, ultrasound machines have made their way into the offices of those who cater to amateur and professional athletes.

Even more, portable ultrasound has made their way down to the field, the court, the pool, or the track where athletes compete for an immediate view into their body to determine everything from bone damage to abdominal issues to heart problems and even as a therapeutic tool for treating muscle problems.

In the past an athlete had to be taken to a hospital to determine if there was indeed an injury and to what extent. Now, an athletic trainer can ascertain right at the location of the injury what the diagnosis is and make recommendations about their ability to either continue performing or to seek treatment.

Muscles are made up of an outer sheath that surrounds a muscle bundle made up of many fibers, which are in turn made of micro fibers that can only be seen by a microscope. The muscles contract, or shorten, or slides apart, causing them to lengthen. Our brains give orders to them that are passed through our central nervous system at blazing speed, and this allows us to swing a baseball bat, dunk a basketball, or swim the butterfly.

Muscles in athletes are typically strained when they are overused or over-stretched or contracted too quickly. Awkward motion of the muscle can also cause strains. Tears of the muscle result in the muscle being stretched beyond their ability. Think of when you may have pulled a muscle running or leaping over something and the pull you felt. Was it a momentary strain or was the pain ongoing requiring treatment or rest? There are three levels of strains, Grades 1, 2, and 3, with one being least severe and 3 being most.

Portable ultrasound technology can quickly identify how serious the strain or tear might be. This allows the medical trainer or team physician to diagnose and make a judgment call on what needs to happen to heal the player and get them competing again as quickly as possible.

Athletes know better than most just how important their bones and ligaments are for their daily work. If a tendon is torn, a bone is broken, an ACL has ruptured, or an ankle has OCD lesions, a portable ultrasound machine at the moment and location of the injury will be able to quickly ascertain the gravity of the injury and what treatment needs to occur. Knees, shoulders, femurs, elbows, and skulls are areas where injuries commonly happen to the athlete. In the past, they would have to be carted off to the hospital and wait to be seen by an attending nurse or physician before being diagnosed. I recall one night after breaking a bone in my hand while playing basketball that from the time I was injured until the time diagnoses and treatment occurred took 3 hours. Diagnosis alone took 1 ½ all the while I held on to my dangling finger. While it was not a serious injury in terms of my life, my finger was never the same afterwards. Had diagnostic ultrasound been used and the assessment been much more quickly, the athletic trainer could have set it properly and possibly prevented further damage.

Thermotherapy for Athletes and Ultrasound

In addition to being used as a diagnostic tool on the field of play, ultrasound is now also being used as a thermotherapy tool for muscles. New uses for portable ultrasound around the wounded muscles include using the heat the sound waves create to stimulate the wounded area to get healing blood flowing back through the area. However, because heat causes increased swelling, it is a best practice not to use heat immediately after an injury, but instead use cool products and ice to reduce the swelling. Once the swelling subsides, the area may be ready for portable ultrasound heat treatment.

Physiological effects of using thermotherapy heat from an ultrasound machine include:

Portable ultrasound allows for medical personnel to immediately gauge the depth of an athlete’s injury and make judgment on whether they can continue playing or seek further treatment. New uses for portable ultrasound systems in sports medicine appear all the time.

From the writers at RevenFlo

Related Blogs:
More News about the Costs of Playing Football!
Has The Modern Football Boot Increased The Number Of Injuries To Star Players?

2 Responses to The Sports Archives – Portable Ultrasound in Sports!