A graphical representation of a football play. Visual communication is often helpful in teaching and drilling plays.

Hectic, fast-paced, coarse…all words that could describe the flow of gameplay in American Football. There’s no denying the intensity behind this renowned sport, but a critical element of success that is easily and frequently overlooked is the logic and planning that contribute to a football team’s success on the field. Every play employed in a game of football is implemented with cunning and care, resulting in order and teamwork amid a scene otherwise populated by discourse. What’s the ‘scoop’ on these football plays? Can they make or break a team’s performance? Does a lot of work and effort go into offensive plays to yield more promising results?

The General Properties of a Football Play

Formally, a ‘football play’ is initiated either with the offensive playing team’s quarterback or with a free kick. The play features a strategy from both teams, which, regardless of the more intricate details, generally involves either moving the football into scoring position (offense) or preventing ground from being gained by the offensive team (defense). A play is concluded when the player carrying the ball is grounded, unable to advance further, or steps out of bounds. The field is then “reset” so that another play may begin.

Football plays are made more intricate by the actions and decisions of the playing teams, each which may employ various movement tactics and deployment strategies to bend play into their favor. At the upper level, football is as intricate as a chess game, though on the field, it is carried out as a competition of physical endurance, awareness, and willpower. 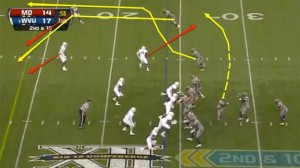 Offensive plays are all about moving the ball closer to scoring position. The methods for doing so are often left very open, so planning the ideal offensive is benefited by a flair of creativity!

Naturally, the team responsible for achieving victory in football is the offense. The offensive force of each football team is comprised of 11 players and an offensive play is spearheaded by the quarterback. Effectively the leader on the offensive, the quarterback is the player responsible for coordinating the rest of the team with the play given by coaches on the sidelines. However, the job of the quarterback does not end there! Immediately before the play is initiated, modifications to the offensive’s plan of attack may need to be made, depending on how the defending team has positioned its players to counter.

While valid options for moving the football for the offensive may seem limited, other elements of each game will have an influence on what each offensive play entails. This can prove to be both advantageous for the offensive and detrimental. For example, running plays are, commonly less-attempted if the offensive is on a 3rd or 4th down, due to the perception that passing is more likely to yield results vital to progressing the game. Thus, while the defense and offense alike may have no foreknowledge of the next play the opposing team will execute, assumptions can be made and certain actions accounted for (on occasion, correctly!).

In football, defending is much like plugging the holes in the hull of a boat — while no single solution will be perfect for every situation, predicting patterns in the offensive’s movement to ensure widest coverage is the key to success!

The role of the defending team in football, while drastically different, is nonetheless straightforward: don’t let the ball advance! As is common in strategy-oriented games, the defending team’s actions are primarily reactionary, which means that most of the decisions regarding defensive play will be focused on what the offensive might do.

In constructing the ideal defensive play, it is often a challenge to achieve a balance between making bold predictions and ‘playing it safe’. This is because, while a prediction may pay off magnificently if it is correct, it can be an enormous waste of resources on an individual play if it is wrong. Interestingly enough, while the energy and intensity of football may suggest a wall of fortuitous blockers is the key to stopping the offense dead in its tracks, the defense’s role actually consists of creating an intricate web of traps that covers as many angles as possible, slowing, stalling, and countering the offensive’s encroachment.