The Sports Archives – The History And Basics Of Wheelchair Basketball

Posted on December 5, 2012 by thesportsarchives 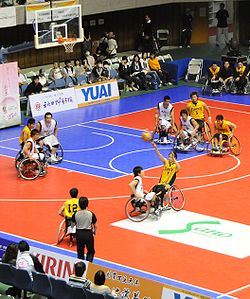 The History And Basics Of Wheelchair Basketball

With the popularity of this year’s Paralympic Games, we think it’s time to take a closer look at one of the most watchable sports: wheelchair basketball. Developed by American World War II veterans, this activity became much-loved, not just as a rehabilitation program, but as a competitive sport across the world. Tellingly, more than 80 countries now have a wheelchair basketball teams.

In the Paralympic Games, 12 teams competed in the men’s and 10 in the women’s groups. Each team has 12 athletes – 5 players and 7 subs. Every participating country is only allowed one men’s and one women’s team.

Of course, every person in a wheelchair has varying levels of disability, and this is reflected in the classification of athletes. The points range between 1 and 4.5 – 1 for the lowest physical function and 4.5 for the highest. In total, a team can’t exceed 14 points for their players.

The field of play is 28 metres long and 15 metres wide. The baskets are 3.05 metres above ground. The court is split down the middle, with the three-point line 6.75 metres away from each basket and the free-throw line a little closer at 5.8 metres.

Generally, wheelchair basketball is no different to basketball: the court size, the basket height, and the scoring are all identical. You get 2 points for a regular shot, 1 point for every successful free throw, and three points when you score from a distance. Athletes also pass and dribble the ball – wheelchair players have to throw or bounce the ball every 2 turns of their wheels or they will be accused of traveling. The game lasts a total of 40 minutes, which is split into 10 minute quarters and players can call for time-out for one minute, if they like.

Every wheelchair basketball player needs to be strong, fast, and high in endurance. Not only that, but they need to have fantastic skills with a basketball and a tactical mind. It also helps to have a fantastic chair like the products available at disability specialists, Allabilitycycling.

Like most sports, a referee presides over the game, as well as two umpires. There will be timers and scorers on hand to take care of the play’s statistics.

Some violations that aren’t tolerated on a wheelchair basketball court are traveling, going out-of-bounds, or rising out of the seat to achieve an advantage over other players. Usually, this results in the ball going to the opposition.

For fouls against other athletes like blocking, pushing, or charging, the opposition team gets a throw-in, but if the victim was close to scoring, then more than one throw-in may be awarded.

An ‘assist’ is when a pass goes directly to a teammate and they score. ‘Downtown’ is the area outside the three-point boundary. Finally, ‘shot clock’ is the 24 seconds awarded after a shot to get another rim-touch, or the ball turns over to the other team.

Article written by Jamie Knop on behalf of Allabilitycycling.

Related Blogs:
History of the Paralympics!
An Introduction to Goalball: How Touch & Sound Trump Sight!