The Sports Archives – What Causes Stitch When Running?

Posted on September 15, 2012 by thesportsarchives 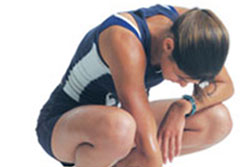 Any individual who has taken part in a run or other exercise activity will almost definitely have experienced the sharp pain below the ribs at some point known as ‘stitch’, but what are the reasons behind this?

Research shows that a high percentage of people who take part in running on a regular basis have at some point (or more frequently in plenty of cases) suffered from stitch (also known as Exercise-related Transient Abdominal Pain), which is described as an uncomfortable and sharp feeling in the upper abdomen. It can either disrupt your run or it can stop you in your tracks until it has passed, but what is certain is that it is a very unwelcome occurrence. The exact cause has been debated many times, with some theories appearing to have more scientific weight than others.

How does it happen?

There have been a few possible reasons suggested as to why stitch occurs and one of the most common of these is that the diaphragm, separating the heart and lungs from your abdomen, does not receive as much blood as it should do. This particular reason has been challenged because stitch can also happen when someone is taking part in an activity that does not necessarily need a great deal of activity in a respiratory sense.

An alternative reason often cited is that the body has trouble digesting certain fluids and this can mean that the ligaments from the organs in the abdomen through to the diaphragm can be pulled on during running and other similar activities. This idea however has been met with scepticism from some quarters due to the fact that swimmers can suffer from stitch despite not being subjected to the movements that cause this pulling on the ligaments.

Those who have undertaken studies into the causes of stitch have suggested that you can help yourself in avoiding it by warming up sufficiently and steering clear of some other practices. It is recommended that you do not have carbonated drinks before your session as well as not eating too close to beginning exercise.

Dealing with it when it occurs

Unfortunately, stitch is a frequent complaint for many runners and due to so many experiencing it there have been numerous possible ways to lessen the effects of it that have been suggested. You can battle through until the pain subsides or you can stop the run temporarily. Breathing out heavily as your right foot hits the floor is also recommended, as is stopping to stretch and touch your toes. Pressing on the area where you are feeling the stitch has been reported as quite successful also.

Article written by Lewis Johnson representing http://www.irishfit.eu who offer a large selection of exercise clothing and equipment, from the mens wet suit to nutritional supplements.

2 Responses to The Sports Archives – What Causes Stitch When Running?