The Sports Archives – How L.C. Greenwood impacted the NFL

Posted on October 9, 2013 by thesportsarchives 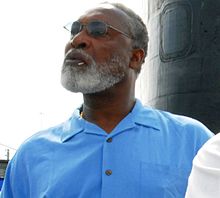 The football community in Pittsburgh and across the nation paused to honor the passing of L.C. Greenwood on September 29. As the powerful and dominant member of the Steelers’ “Steel Curtain” defense, Greenwood succumbed to kidney failure at age 67. Greenwood was an integral member of the dominant defensive force of the 1970s Steelers, and played a central role in the 1975 Super Bowl, which was the first for the Steelers. During Greenwood’s tenure with the team, he would help the Steelers win a total of four Super Bowls in just six years.

Size, speed and power were the central facets of Greenwood’s game, and his relentless style helped inspire defensive players for generations to come. Greenwood used his athletic ability to turn into a veritable sacking machine, retaining the speed and agility he showcased in college even after bulking up to 245 pounds to play professionally.

Greenwood’s career spanned from 1969 to 1981, during which he was an All-Pro twice and received six impressive Pro Bowl invitations. Greenwood’s success in the NFL came as a surprise to many, as the lanky athlete out of Arkansas A&M wasn’t selected until the tenth round. The teams who passed up Greenwood would soon regret doing so as they watched him blow by their offensive tackles to attack the quarterback. Greenwood would go on to record 73.5 sacks for his career, including four crucial sacks of Roger Staubach in the 1976 Super Bowl against the Dallas Cowboys.

Greenwood also used his height — he was listed at 6’6″ — to swat away passes.  His agility, speed and overall football sense allowed him to scoop up 14 fumbles throughout his career. In an era before huge publicity, Greenwood earned a reputation as a showman partly due to a stint in the 1973 season during which he wore a pair of custom-painted gold high-top cleats. The cleats, originally worn to support a healing ankle, would make recurring appearances after the Steelers lost on a game Greenwood did not wear the pair. Greenwood’s physically aggressive and fast-paced playing style is one that now makes for short careers but Greenwood managed to avoid injury for the majority of his 13 years in the league.

At the end of his playing days, however, knee problems took their toll on Greenwood and he retired after helping the Steelers build the foundation for a dynasty that lasts to this day. Greenwood also left a legacy for the league, moving the game toward an era in which all players had to be bigger, faster and stronger, rather than each position having its own particular set of attributes. The higher bar for athletic prowess at every position can be traced back to Greenwood’s accomplishments as a huge, speedy and skilled defensive end.

Greenwood also set a positive example for post-playing activities. Greenwood exited the NFL but remained active in the Pittsburgh community through his business ventures and motivational speaking appearances. By giving back to the community that long cheered him on, Greenwood brought his career full-circle during retirement.

The funeral for this mighty player was on October 7, but clips and remembrance for the football legend will be on every sports site and sports TV channels for days to come.

BIO: Adrian Rawlings is a sports and entertainment blogger.  Look to him for the scoop on hit movies and TV shows, sports, tech reviews, how-to’s, and more.