The Sports Archives – The Greatest Racehorses of All Time!

Posted on January 19, 2013 by thesportsarchives

Horse racing has created some superstars over the years, and not all of them have been human. Some horses live long in the memories of fans for generations because of their heart, character and will to succeed. Success is, of course, gauged by wins and prize-money, yet there are some horses that completely transcend the sport. Their achievements are not just recognised by those involved in horse racing; they are celebrated by the general public. These three horses have achieved a level of fame every bit as impressive as the great jockeys of the sport.

It is often difficult to compare athletes who performed in completely different eras, and the same is true for horses. However, many within the sport believe that Arkle was the greatest racehorse ever. This Irish-trained horse was well-known for its ability to perform while handicapped by extra weight. Indeed, many racing enthusiasts believed it was this success in the midst of adversity that made Arkle one of the greats. Nicknamed ‘Himself’ by those who loved him, Arkle won the Cheltenham Gold Cup an incredible three times in successive years. 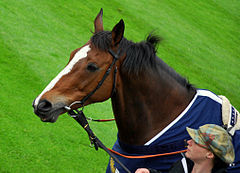 Kauto Star possessed an enormous amount of natural ability, and he was able to combine incredible sprinting speed with stamina. Those who saw him in the flesh would say he actually looked like a champion, and he backed up his looks with an impressive record of wins in Britain and France. Kauto Star was able to adapt his style to both long and short distances, and his results speak for themselves. Winning the two-mile Tingle Creek and the three-mile Cheltenham Gold Cup is a feat of incredible diversity. As well as a string of successes, Kauto Star was the highest-rated staying chaser since Desert Orchid. This incredible horse only raced in twenty-six races, but he won an incredible fifteen of them, and he placed a further eight times. It is worth noting that he frequently went up against stablemate Denman in longer races, who was a very highly rated horse, so Kauto Star certainly didn’t have it all his own way.

This incredible racehorse had a personality all of his own. Perhaps the most well-known National Hunt horse of all-time, Desert Orchid was a true celebrity in his own right, and his profile would have people flocking to racecourses just to catch a glimpse of his famous grey coat. ‘Dessie’ was famous for taking on races from the front, and the flamboyant way he jumped fences was the stuff of legends. However, it was the stunning way he won the Cheltenham Gold Cup in 1989 that will probably be his crowning glory. The image of him battling through terrible conditions to take the race by a nose showed a different side to Desert Orchid; it showed that this horse also had a steely determination. He won an incredible thirty-five of the seventy-one races he competed in, and he may always be remembered as the most loved racehorse ever.

This article was produced by Keith Prowse – a leading supplier of hospitality and Cheltenham Gold Cup Tickets.

Related Blogs:
Top 5 Horses of All Time!
Top 5 Racehorses In The World!

7 Responses to The Sports Archives – The Greatest Racehorses of All Time!