Posted on December 3, 2012 by thesportsarchives 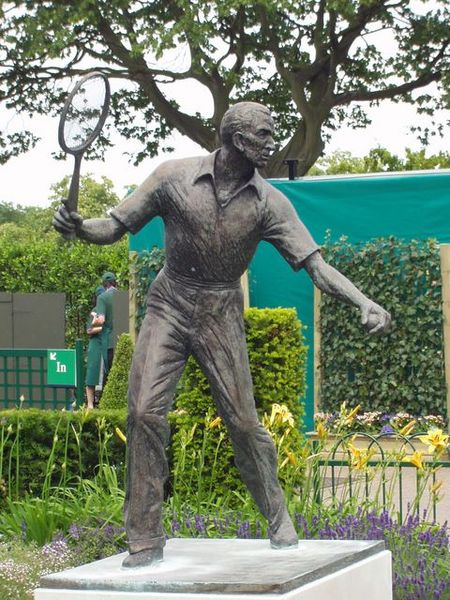 It is strange to look back at the life of a tennis legend and consider that his greatest achievement may actually have come in the business arena not on the Tennis Court. Fred Perry won an incredible 10 tennis grand slam tournaments including three consecutive victories at Wimbledon and was the first player to win all four Grand Slams, but perhaps his greatest legacy is the iconic sportswear brand that bears his name.

Fred Perry was born in Stockport in 1909. He was from a working class background and this proved troublesome during his tennis career. At that time the sport was the domain of the privileged classes who jealously guarded the principles of amateur sport and the traditional etiquette of the game. Perry was a feisty competitor whose antics on and off the court met with disapproval and he was not a popular figure with the British tennis authorities. He eventually turned professional to complete his alienation and spent much of his time out of the country playing on the professional circuit in the United States.

As a player Fred Perry was given to wrapping a piece of gauze around his wrist to wipe away sweat and keep moisture away from his racquet handle. In the 1940’s he was approached by Austrian footballer Tibby Wegner with an idea for a sweatband fashioned in towelling. Perry liked the idea and together they evolved a prototype which was too heavy but showed great promise. They developed a lighter, more practical model and went in to production. Perry showed himself to be an astute marketeer by giving free samples of his fledgling product to the players, asking them to wear them at tournaments. The sweatbands were a great hit and Fred Perry Sportswear was born.

The second product for the new brand was a slim fitting white cotton pique shirt. The shirts were as skilfully merchandised as the sweatbands. Perry offered them to the players and the BBC cameramen at Wimbledon. He even wore one himself whilst commentating. The players loved the new slimmer fit and Perry had a huge success on his hands. This shirt became the signature garment of the brand and remains so today. The iconic laurel wreath emblem that adorned the shirts was the suggestion of Wegner who thought it perfect because it signified victory in ancient Greece. Perry had wanted a cigar!

The shirts had been popular with sportsmen but met with even greater success as fashion statements. The arrival of the Mod movement was the defining moment for the brand. The Mods were big on their image and sought a sharp suited look with a modern twist. The Fred Perry shirt with its quality,comfort, collar and slim fit was the perfect partner for the single breasted suits they favoured. Eventually Mods wanted to put a stamp of individuality into their outfits with the addition of colour and Fred Perry Sportswear responded with an expanded colour palette for the shirts.

Over the years the Fred Perry brand expanded to include jackets, knitwear, bags and even ladies wear. It has evolved and been enhanced by collaborations with designers and the input of fans like Amy Winehouse, but has always retained a retro style representing British cool. The brand has been kept in the spotlight by celebrity followers whose images fit perfectly with the retro cool brand. Damon Albarn, Paul Weller and Amy Winehouse have all been enthusiastic wearers of the clothes but the company have always refused to pay for celebrity endorsement. It does now have a signature range of Bradley Wiggins cycling apparel. The brand that started with a simple sweatband became an empire founded on quality, style and sticking to its principles.

Fred Perry died in 1995 and in that year Fred Perry Sportswear was sold to the Japanese company Hit Union. Perry left an amazing legacy of sporting success, his career in the spotlight more than ever in 2012 because of the achievements of Andy Murray as he became the first British player to win a tennis grand slam since Perry. It is possible, however, that many will think fashion before sport when you mention the name Fred Perry.

Sally S writes on a wide range of subjects including fashion and sports. A tennis fan, Sally enjoyed researching this article about one of the all-time greats of the sport.