The Sports Archives – Where does Manning stand in the all-time NFL greats?

Posted on January 10, 2020 by thesportsarchives 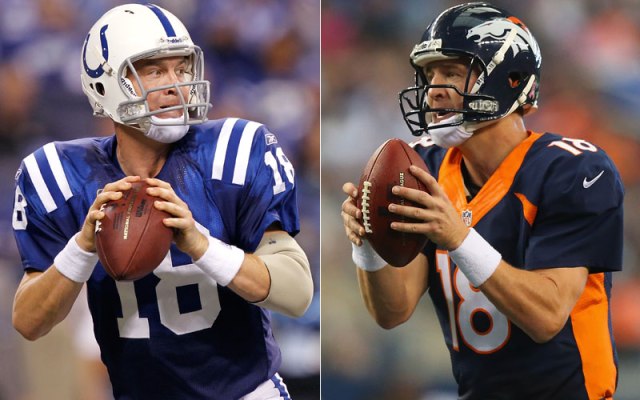 Peyton Manning established a career as one of the greatest quarterbacks of all-time during an 18-year career with the Indianapolis Colts and the Denver Broncos. Manning won five MVP awards and two Supers Bowls – one each with the Colts and Broncos – before he retired after the 2015 season.

Manning was known throughout his career for his brilliance at the quarterback position, but despite his success, he is not considered the greatest quarterback of all-time. Unfortunately for Manning, he was playing in the same era as Tom Brady – winner of six Super Bowls at the time of writing.

Drew Brees has since surpassed the records that Manning set for total passing yards and touchdowns. Aaron Rodgers has produced more wow moments than any of the other three have created in their illustrious careers due to the immense talent of his arm and athleticism.

Manning’s own legacy with the Indianapolis Colts could have been in danger due to the talent of Andrew Luck before the quarterback prematurely retired. The Colts are in the market once again and could be ready to make a move for a top talent in the 2020 Draft or free agency.

The Colts should track their competitors in the NFL with news from WSN to determine the viability for a Super Bowl run in 2020. It’ll be especially hard with their team missing a passer of the quality of Manning in the 2019 season. A new man at signal-caller could spark a run to the Super Bowl and match Manning’s total of one Vince Lombardi Trophy in Indy.

Winning the ultimate game was always the problem for Manning during his career. He was under pressure from the moment he arrived in Indianapolis after being selected first overall in the 1998 Draft. To his credit, he pulled a struggling franchise into a contender in the AFC Conference within a year of his arrival, although Manning did lose his opening two playoff games.

Another crushing defeat followed in 2002 before he finally got over the hump in 2003 in his first MVP season. However, there for the first time, he met Brady and Bill Belichick – the Colts were humbled by the New England Patriots defense, slipping to a 24-14 defeat in the AFC Championship Game. It was the same story a year later when Manning returned as the MVP – on this occasion he threw four interceptions in a 20-3 loss in the Divisional Round.

The 2006 season was his redemption story, mounting an 18-point comeback to defeat the Patriots in the AFC Championship Game before beating the Chicago Bears to win his first Super Bowl. Manning’s performance in the Super Bowl was not an elite one, struggling in the rain in Miami. It took another three years to reach the ultimate game again – once more in Miami. However, he threw a costly pick-six against the New Orleans Saints, losing his duel with Drew Brees in the process.

After suffering a neck injury in 2011 that ruled him out of the campaign, he moved on from the Colts to join the Denver Broncos. However, the playoff heartbreak followed him with a defeat to the Baltimore Ravens, who went on to win the Super Bowl. He managed to overcome Brady and the Patriots the following season to return to the Super Bowl following a record-breaking year. Manning and his offense were then crushed by the Seattle Seahawks in New York.

Powered by an outstanding defense in 2015, Manning out-battled Brady once again to return and he did win his second Super Bowl to bow out on a high note. The quarterback was carried over the line by Von Miller and the Broncos’ vaunted defensive unit, but it was enough to overcome the Carolina Panthers.

It did in some ways damage his legacy, proving that he was never able to have a signature moment in the biggest game. With Manning, it always appeared when the pressure was on in the playoffs and the Super Bowl that a mistake was not too far away. His career in the regular season was nothing short of sensational, but legacies are defined in the post-season. He was overshadowed by Brady and there’s still time for him to be pushed down the pecking order in the modern era by Rodgers and potentially Brees.