The Sports Archives – Messi, The Greatest Player Ever?

Posted on February 4, 2013 by thesportsarchives 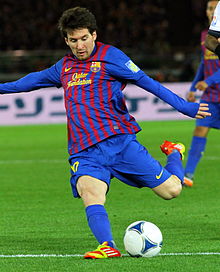 Football superstar and legend Lionel Messi has just received an unprecedented fourth Ballon D’or Award for being the best footballer on the planet, voted for by national captains, managers and also journalists across the world. Not only was it the fourth time that he had won this award, which is an achievement on its own, the little magician from Argentina has won these awards consecutively. It’s easy to take from this that the man who is coveted by all clubs across the globe has dominated world football for the past four years.

Many believe he will continue to dominate over the coming years. And there isn’t many people arguing against this due to the fact the he is still only 25. Footballers are considered to be in their prime at 27, so on this understanding it would suggest that the best is yet to come. This is quite frightening and exciting, as last year Messi broke an astonishing amount of records, most notably (apart from the previously mentioned Ballon D’or awards) he broke a 40-year-old record for most goals in a calendar year. This was 85 goals set by German legend Gerd Muller. Not only did Messi surpass this, he breezed passed it with an astonishing 91 goals in the calendar year of 2012.

Even though Messi has won all of these individual awards, upon being presented the fourth Ballon D’or of his career he announced that he prefers team accolades and wasn’t happy that Barcelona missed out on the League title and the most prestigious of them all, the Champions League. Barcelona still won four trophies last season so it wasn’t an entirely unsuccessful campaign.

This article was written by Pedro Rodriguez who always wears under armour heat gear when playing sports.

1 Response to The Sports Archives – Messi, The Greatest Player Ever?