The Sports Archives – Three of the Most Financially Responsible Professional Athletes !

Posted on May 8, 2014 by thesportsarchives

If it bleeds, it leads. That’s the tenet of many media organizations when deciding which stories to report on first. Our society focuses on the negative; international conflicts, murderers, serious crimes, famous people making huge mistakes, the list goes on. Rarely do we read or hear about a story that makes us feel happy about life and about the good things people do for others. It’s the same way with sports. You’d be much more likely to hear about Kobe Bryant’s adultery case than you’d hear about the children’s hospital Peyton Manning funded himself. It’s just the way it goes. When it comes to athletes and their personal finances, we tend to focus so much attention on the athletes that blow their entire paychecks in nightclubs, make egregious purchases on impulse, or go into major debt and fail to recover after poor investments. Let’s look on the brighter side of this and focus more on the athletes who have been intelligent in regards to their spending and investment habits. 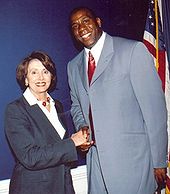 The model of financially efficacious athletes, Magic Johnson’s net worth is over $500 million. He owns a movie studio company, owned then sold a chain of Starbucks, and owned then sold a percentage of the Los Angeles Lakers, gaining him around $50 million alone.

The highest paid tight end in the NFL, Vernon Davis is one player that current professional athletes can attempt to pattern themselves after. He is humble, hard-working, extremely productive, and financially successful. Oftentimes professional athletes invest into dead-end companies (usually with friends or family) that continue to require capital after initial failures. Athletes attempt to give life-support to failed businesses and are eventually dragged down with the sinking ship. If you haven’t watched ESPN’s great 30 for 30 documentary titled Broke you need to.

Davis has avoided these tempting business ventures. He puts much of his time into his interior design company, Modern Class Design. He also owns a couple successful Jamba Juice franchises in San Francisco. Low-risk is the name of the game for Davis and he continues to thrive as a businessman and as a professional athlete.

Forbes estimated that Shaquille O’Neal’s net worth is around $140 million. Over the course of his career he made nearly $300 million. Beyond being a successful NBA player and one likely to get inducted into the Hall of Fame, Shaq is also a successful businessman. He owns a real estate company, The O’Neal Group, in Miami. He’s got stakes in a soft drink company, Vitamin Water, and a protein supplement company, Muscle Milk. This is without mentioning his many endorsement deals. He’s done so for Taco Bell, Radio Shack, Burger King, Pepsi, Icy Hot, and most recently Buick. He’s got as diverse of a business background as possible. Oh, he also recently achieved his MBA from University of Phoenix.

These are just a few of the most successful professional basketball players who also did well after retiring. There are plenty of others not mentioned here – Michael Jordan and Peyton Manning just to name a couple. While athletes catch most flak for being unintelligent with their financial decisions and spending big money on cars and jewelry, there are many who are also quite good with managing the large paychecks they accumulate.

Related Blogs:
Back To Reality: What Do Elite Athletes Do When They Retire?
5 Smartest People In All of Sports!
Intelligence in the NFL!

2 Responses to The Sports Archives – Three of the Most Financially Responsible Professional Athletes !