The Sports Archives – What Makes American Sport Such a Spectacle?

Posted on December 14, 2013 by thesportsarchives

Whenever you think about American sports, you think about the Super Bowl, the World Series, and even to the times when they have hosted major global sporting events, such as the Salt Lake City Winter Olympics in 2002 and the Summer Games of 1996 in Atlanta.  What strikes you about all of these events is that they are all spectacular and memorable in a variety of ways. There is no question that the United States has a real individual identity when it comes to sport; what are the hallmarks of this?

There isn’t anything in the world that is as well produced as an American sports broadcast. Everything from the ceremonial introduction of individual performers or teams down to the types of adverts shown during the commercial breaks is planned and perfected down to the minutest degree.

Think about an NFL game that you have watched in the past. Even if it is a game between the two worst teams in the country, there is still the cheerleaders, the music, the mascots, and the big introductions onto the pitch. Saying it is part of the “brand” of American sport sounds like you’re taking away from the soul of what sport is about, but that is really what it is.

So many people are involved with making the presentation of sport what it is, from television companies to the organisers of the competition to the competitors themselves.

You can look at sporting events from around the world and find dancers, fireworks displays, and various other features, but the reality is that no-one does it quite like America. Everything is done at 100%; you know you’re watching an American sporting event!

Everything we have looked at so far focuses on the visual aspect of American sports. What you hear is also important, as without the appropriate soundtrack – in this case the sports commentators – you only get half of the experience. While what you see on-screen is enough to build excitement, American sports commentators and announcers are a unique breed; they have the ability to make even the most mundane things seem exciting, so imagine what they can do when they have all of this production and 100% effort behind them?

When you look at sport at its most basic level, it is about winners and losers. While winners are celebrated in every sport around the world, in America they are put on a pedestal where they become superstars. If you win something in America, you don’t just go on the back page of the newspaper, you look out from billboards across the country and stand on the verge of becoming a global megastar.

This is a huge part of the spectacle both for those watching the event, but is also a huge motivating factor for youngsters in school and college who aspire to perform at such large-scale events. There is no spectacle in the world like American sport, as anyone who has ever witnessed it could attest to. 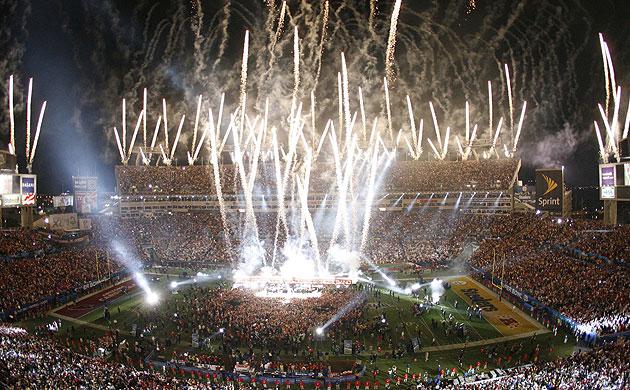 Author Bio: Danny loves watching American sport on television and recently purchased a number of packs from Fireworks Crazy in order to recreate his own US sport spectacular fireworks display in his garden.

Related Blogs:
How American Football Is Storming The UK!
Is Cheerleading Considered a Sport?
Unexpected Ways to Support Your Team!

4 Responses to The Sports Archives – What Makes American Sport Such a Spectacle?