Posted on December 6, 2013 by thesportsarchives

Originally introduced in 1966, artificial grass has changed the lives of many sports players across the globe, which is not bad for a product less than fifty years old. By being used to create high performance artificial sports surfaces for a variety of sports, artificial grass has helped prevent outdoor pitches from becoming unplayable soggy mud baths, ultimately allowing more players to practice and become better at their sport.

There are 3 key sports however where artificial grass was considered completely revolutionary. Read on to discover more about the ground-breaking benefits artificial grass has had and promises to have in the future of baseball, British football and field hockey.

A staple U.S. sport, synthetic grass was first used in 1966 at the Houston Astrodome for their Major League Baseball tournament. The demand of the new synthetic grass lawns was due to the architecture of the building itself, as its semi-transparent ceiling panels did not allow enough sunlight to pass through to encourage the growth of natural grass.

For the majority of 1965, any baseball games were played on dirt which was painted green or dead grass, so a solution was needed which would provide the same natural look but without the maintenance. Known as ‘ChemGrass’, groundskeepers were required to regularly keep the turf clean with vacuum cleaners before its installation was complete in July 1966.

The craze soon caught on at other major stadiums in Pittsburgh, Philadelphia and Cincinnati, and had several benefits for baseball players using them regularly to compete. Balls bounced higher on artificial grass than on real grass, ensuring a more accurate throw if the ball was bounced towards a player to catch. Providing protection against the elements and consequently allowing for more practice, this demonstrates how synthetic grass lawns are still a popular choice for baseball grounds and parks to this day in northern America. 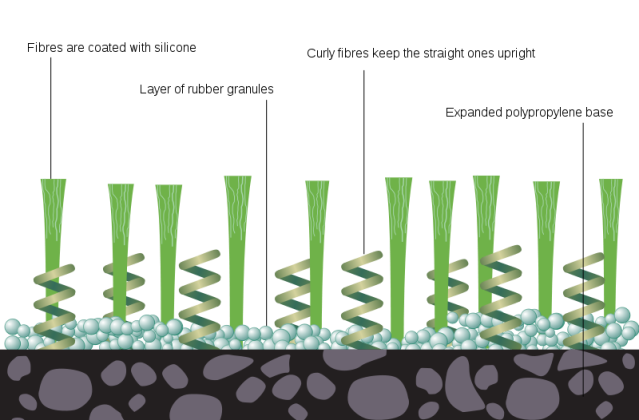 For British football fans the introduction of ‘plastic pitches’ in the 1980s sparked intense debate. Clubs which installed fake grass lawns included QPR, Luton, Oldham and Preston, but were discredited in 1988 due to complaints that they affected the quality of the game. Due to the advances in technology however, football clubs in Italy, France and Russia now choose to play on artificial pitches, as well as a number of local clubs in Scotland along with the Women’s Premier League.

These modern hi-tech artificial pitches have also been approved by governing body FIFA, encouraging clubs to use them to saving maintenance costs whilst providing an opportunity for teams to practice seven days a week rather than at seasonal periods. Integrated with shock pads as well as range of other modern safety features, this is why discussions have already started to re-introduce synthetic pitches in football clubs across the UK.

The introduction of artificial grass to the pitches used for field hockey has been described as the “synthetic revolution”, being first used in the 1976 Montreal Olympic Games.

The benefits helped to completely change the game, with players discovering that artificial grass surfaces helped increase the speed of their game and enabling them to practise new tactics and techniques accordingly. New dribbles and moves were created to counter-act the fact that balls now travelled straighter on synthetic surfaces and were able to be hit much harder, later leading to changes regarding material of hockey sticks, goalkeeper uniforms and protective clothing. Due to these radical changes, artificial pitches are now a mandatory requirement for all international hockey tournaments, as well as for individual national competitions.

This article is written by Marie who is a part-time blogger who is an expert in writing articles on home improvement and gardening techniques.