The Sports Archives – Football (Soccer) For Kids 2 To 7

Posted on November 6, 2013 by thesportsarchives 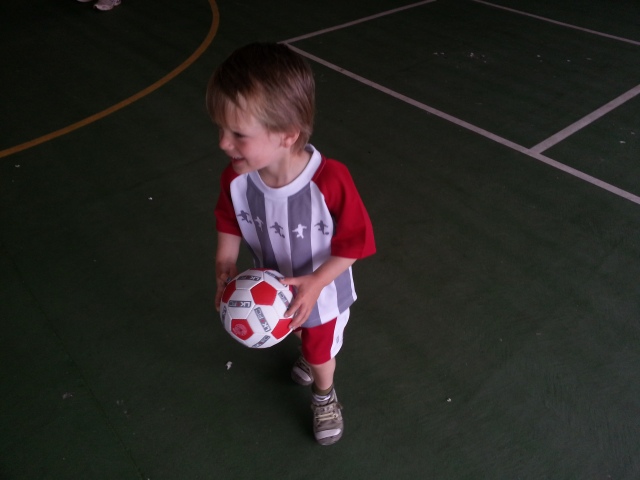 I have a 2.5 year old and I wanted my son to learn teamwork, cooperation as well as coordination and athleticism.  My wife and I started to look around Perth to see what such a young child could do.  I have got to be honest, the choices were a little limited.  But then we found it.  Soccer!

There is a world-wide organisation called Little Kickers.  They take boys and girls from 18 months to 7 years and run a fabulous soccer program.  I played a bit of soccer as a child so I knew that this was a great option for Quinn.  He would learn to coordinate his feet first and then his hands can come in later.  Quinn has been enrolled in Little Kickers Rossmoyne Primary School.

On his first class he got right into it.  One of the catch phrases was “tic toc” where the kids practise passing the ball from one foot to the other and they say “tic toc”.  Quinn couldn’t “tic toc” and still can’t 7 weeks later but that isn’t the point.

In the first class I had to help him every step of the way.  Explain to him what to do and model the right actions.  However after two weeks I noticed that I became less and less important.  We are now seven weeks in and I barely get involved.  Quinn is two and a half and he can listen and concentrate for 45 minutes.  I am really impressed with that.

The Coaches Are Great Role Models

He is by no means a super kid.  It is the coaches that make the difference.  They are only young 19 to 20 but they are fantastic.  They are happy, vibrant, enthusiastic and really great with the kids.  They run a really fun soccer program and Quinn loves it.  He even talks about “tic toc” and soccer during the week.  Soccer for us is on a Saturday morning at a primary school in Perth.  We say “we are going to soccer today, what day is it?” And he answers “We go to soccer on Saturday.” So he is even learning his days 🙂

The point is that soccer has been so fun for Quinn that it gets him excited and motivated to do other things.  We talk about soccer a lot during the week and as Saturday gets closer he gets more and more excited.  I think that Quinn’s school teachers are going to appreciate his time playing soccer but they wont know it.  Between each activity the kids have to get a drink then sit on the blue mat.  I have noticed that Quinn has developed the ability to sit still and wait his turn for things.  This will be really helpful later.

If you are looking for a fabulous developmental activity for your little boys or girls to get into; then soccer is a great choice.  We have had great success with it but not all the kids seem to enjoy it as much as Quinn has.  It is worth a try though as this family loves it.

Warren Isaac runs a perth based pool and spa repair business.  He is a keen advocate of excellent activities for kids to develop their skills.