Posted on August 31, 2013 by thesportsarchives

Cricket is played everywhere from back yards to village greens to superb stadia. These are among the world’s finest grounds and some of the memorable occasions they have seen.

Located in St John’s Wood in London, Lords is the ‘home of cricket’ and is where every international cricketer dreams of playing well enough to get their name on the honours boards that commemorate players who have scored a century or taken five wickets in an innings in a test at the ground. The present ground is the third. It is named after businessman Thomas Lord who staged a match at the first ground in 1787. The first match at the present ground was played in 1814 and the first international – a test against Australia – was played in 1884.

One of England’s fondest memories of Lords, is the 2009 Ashes test, when captain Andrew Strauss made 161 in the first innings setting up England’s first win over Australia at the ground since 1934.

Simply called the MCG, the Melbourne Cricket Ground dates back to 1854. It is the world’s largest cricket ground and can accommodate 100,000 spectators. It plays host to the annual Boxing Day Test, traditionally the first day of a test against a touring team.

The MCG has seen many memorable moments. In the third final of the 1980/81 Benson & Hedges World Series Cup, for example, New Zealand needed to score six off the last ball to win. With No.10 batsman Brian McKechnie at the crease, Australian skipper Greg Chappell instructed his younger brother Trevor to bowl underarm in one of the least sporting moments in cricket history.

The Ashes Test in 2006 was less controversial. The crowd had come hoping to see Shane Warne take his 700th test wicket and they were not to be disappointed. With England struggling, Warne bowled Andrew Strauss, the only batsmen to put up any resistance, in the 47th over on the first day, to reach the milestone.

The KIA (formerly Kennington) Oval hosted England’s first international match in 1880 (a win against Australia) and is now the traditional location of the last match of the summer series. It also saw the birth of the Ashes. In 1882, England collapsed from 51 for 2 to 78 all out while chasing a mere 85 to win, prompting the Sporting Times to publish a mock obituary mourning the death of English cricket, adding that the body would be cremated and the ashes taken to Australia.

Here, in 1964, Fred Trueman took his then record 300th test wicket and, four years later, Derek Underwood would take four wickets in 27 balls to win the test against Australia after rain looked to have ended all hopes of victory. The Oval also saw a famous draw in 2005. Needing only a draw to win the Ashes, England started well with Andrew Strauss scoring a century and Andrew ‘Freddie’ Flintoff scoring 75 and then taking five wickets. But in the second innings England collapsed to 126 for 5, when Kevin Pietersen cracked 158 off 186 balls to secure the draw and the Ashes.

Against the stunning backdrop of Table Mountain, Sahara Park Newlands, a test match ground since 1889, is one of the world’s most attractive grounds. It hosted the 2003 Cricket World Cup and the inaugural T20 World Cup.

One of the most astounding matches at Newlands was a 50-over game in 1993 in the Total International Series between the West Indies and Pakistan. On what is usually a good wicket, Pakistan were skittled out for 43 (a total that included 10 extras), with six batsmen getting ducks. The ground also put on a sparkling show for the opening ceremony of the 2003 Cricket World Cup, a display that was eclipsed by a brilliant century from Brian Lara that helped the West Indies to a nail-biting three-run win over the hosts. 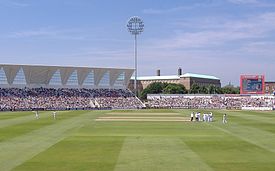 A favourite with fan and players alike, Trent Bridge has been a cricket ground since the 1830s and hosted its first test – England versus Australia – in 1899. It boasts one of cricket’s most iconic pavilions.

In 2005, Australian captain was furious at being run out by substitute fielder Gary Pratt, accusing the English of using a specialist fielder. England won by three wickets. And, in the first test of the Ashes 2013 series no one will forget the brilliant display by 19 year-old Australian Ashton Agar, who scored 98 on debut batting at No. 11 when all the senior batsmen failed.