The Sports Archives – Real Madrid: The Story Behind The Famous Brand!

Posted on August 6, 2013 by thesportsarchives

Real Madrid football club is a good example of how an organisation has succeeded in developing a valuable resource – its brand. From this, it has developed a strategy that has managed to promote it and maximise its potential.

This valuable resource is in itself a result of Real Madrid club’s own set of resources. An important resource has been the players who have passed through the dressing room, helping to influence the current club, its corporate culture and its tradition of success generated throughout its history. The brand Real Madrid already had significant value. The main contribution of the management model applied by President Florentino Perez, was first to value the brand, giving it increasing value and then finding various channels to monetise it. This has helped to achieve a competitive advantage over other clubs, enabling the growth and diversification of the club’s activities centred on the main football theme.

To achieve the club’s objectives, the strategy has begun restructuring and refocusing its business to ensure healthy sustainable development. The marketing strategy is to develop the brand to not just be football-centric, in order to develop new business and improve their position in traditional businesses.

Real Madrid has experienced significant success in the development of this strategy, which has allowed Real Madrid to rise to the top of the richest football clubs, by dethroning Manchester United. It has undertaken a dramatic transformation in the income generation capacity of the club that has doubled its revenue in the past years, not purely relying on match day football ticket sales for the Madrid home games.

This amazing ability to generate commercial revenues from sponsorship programs, merchandising and licensing placed Real Madrid in a different position from other European clubs providing a significant competitive advantage. To fully understand the power of Real Madrid’s brand, one needs to fully appreciate its history, and the men that have helped forge its place in the world.

Real Madrid C.F. is a sports club with over 100 years of history. During the 2000-2001 season it won the FIFA award as “best club of the twentieth century.” The award makes Real Madrid a world leader in football and sport in general. However, in recent years, the club’s focus has not been limited exclusively to sport. The business management model, new in Spain, has attracted interest from other teams, the financial press and the investment community at large.

We can not understand the greatness of Real Madrid without talking about its inventor, Don Santiago Bernabeu. He grew up in Madrid. He studied at the College of the Augustinian Fathers, where he began playing football because he says “it was the best way to keep warm in the yard”. His skills attained such infamy in 1909, at only 14, was called to the youth section of Real Madrid, while attending the Instituto Cardenal Cisneros.

At that time the club didn’t have its own stadium so the board rented land in O’Donnell Street. According to historians, Santiago Bernabeu was the most helpful in preparing the football pitch, and even painted the wooden fence which had been purchased by Don Pedro Parages.

Aged 17, he was promoted to the senior team and his contribution was so good that soon his colleagues chose him as captain. Mientras grew as a player, went on to graduate law degree, as was the wish of his father.

When the war ended, Real Madrid had no land, their funds had been plundered and it didn’t have enough decent players to form a team. Undaunted, however, Bernabeu methodically contacted friends and supporters of the club to get the club re-enrolled in the Spanish League.

No doubt, this dedication saved the club from extinction and embedded the best qualities of Bernabeu on the club. He was an athlete who always demonstrated tenacity, showed sacrifice, vision and a great love for the colours of the football club.

To achieve their aims of making Madrid the best club in the world, Santiago created an action plan where each person was responsible for a certain area. He also set up independent technical bodies for each section of the club and even for each category of football. Real Madrid began to emerge throughout Spain first, and then throughout the world in new disciplines such as basketball, handball, volleyball, tennis and gymnastics, among others. That style was later taken on board by other clubs in several European countries.

A New Stadium Was Born 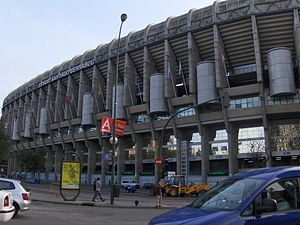 His plan also included building a new Chamartin Stadium, which at that time was the largest in Europe, and Sports City where they could develop a variety of services for the junior and club members.

Despite the administrative success, Real Madrid lacked the results on the football pitch. This was why Senor Bernabeu went looking for the best players in the world. He then contracted, among others, the Argentinean Alfredo di Stéfano, who helped the team win their third league championship after 21 years without a big win.

Such was the influence of the president and the gratitude of the members that on January 4, 1955, the General Meeting decided unanimously to rename the Nuevo Chamartín Stadium, the Santiago Bernabeu Stadium. Senor Santiago did not like the idea, unsurprisingly, as he always shunned the limelight. He felt the former name of giant stadium was part of his life, but as it was the wish of the Real Madrid community, he reluctantly accepted.

Such was his honesty that the team never agreed to pay him a salary as president. His honesty was sealed in a famous saying in Spain: “I believe in God, in Spain and in Don Santiago Bernabeu”, which perfectly illustrates the blind trust people had for the man.

After several victories in the First Division League, Santiago Bernabeu then launched the idea of organising a tournament between the winners of each European League. This project evolved into what is now called the Champions League.

The Flesh is Weak; The Spirit Strong

When Don Santiago learned that he was terminally ill, his health suffered for the first time. He, however, continued with all his commitments to the club he loved so much. His last appearance at the stadium that bears his name caused an unforgettable scene.

120,000 spectators stood and gave him a standing ovation with a mix of applause and tears of tribute to the man who had turned his personal dream into joy for all the Madrid fans.

The last time he addressed the Board of the Club, and could barely stand. Five days later he died. They say that on his deathbed, he asked close friends to promise they would not leave his wife destitute.

It was on June 2nd 1978. Over one hundred thousand people marched through the chapel in the stadium to bid a last farewell. Soon after, at the inaugural World Championship in Argentina, there was a minute’s silence in his honour.

As you can see, the history of Real Madrid is fed by noble and honest men. They were both managers and other players and coaches, who made the club a focus point for unparalleled sporting values and human spirit.

Finally I would like to comment about the Santiago Bernabeu Stadium. I am not old enough to remember, but my 80 year old father tells me that in this area, there were only sheep fields. In fact, I’ve seen pictures of Madrid in the forties and fifties where you do not see a single building, only open fields and pastureland. It’s funny and endearing at the same time, now that the Chamartin area is no longer a local community as in the forties. It is now a top flight financial centre, known as AZCA, with some of the most exclusive and expensive commercial and office space in Spain. And there in the middle of it all, the Bernabeu stadium stands majestic, paying tribute to Real Madrid’s nine European Cups, thirty-two leagues and a host of trophies.

Geoff Roy used to live in Spain, and follows and writes about the Spanish Football La Liga, often for the website SpanishKicks.com

2 Responses to The Sports Archives – Real Madrid: The Story Behind The Famous Brand!