Posted on March 29, 2013 by thesportsarchives

Basketball can be a dangerous game, and players often get injured during the course of their careers. The worst injuries to have been suffered on the basketball court usually involve a player falling hard, or even tripping, but a couple of these are things which no-one could have predicted. 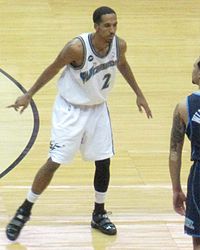 In 2007, Shaun Livingston dislocated his left kneecap, tearing three ligaments in the process, when he landed badly after attempting a shot. He ended up needing to spend over a year in rehab, but eventually came back to the NBA before signing to the Milwaukee Bucks.

During a Big East tournament, Ray was accidentally poked in the eye. It seemed as though Ray’s eye had actually come out of the socket, but in fact his eyelid had merely been forced behind the eye, and the player sustained no more than soft tissue damage.

Allen landed badly after trying to make a shot and tore two ligaments in his knee, needing reconstructive surgery that meant he was out of play for the rest of the NBA season. He eventually returned, but it’s been noted that he’s not been at full strength since.

Roland broke both the tibia and fibula in his right leg during a game with his team, the Texas A&M Aggies, and need to undergo immediate surgery to have a rod inserted in his leg. Despite the seriousness of his injury he returned to play in South America.

Marquis bruised his spinal cord when he took another player’s forearm to his neck. After he fell motionless to the floor, watching fans were worried that the player’s injuries were life-threatening. But Daniels only ended up missing about a month of play before returning.

Sometimes an injury is impossible to predict – or avoid – but there are certain measures that can be taken to lessen the chance that an injury will occur. For example, by investing carefully in granwood floor repairs to keep the court floor smooth and well maintained, it’s possible to reduce the risk of injury by tripping.