Posted on February 12, 2013 by thesportsarchives

The divide between male and female athletics can be almost insurmountable in some sports. For example, it is doubtful that a woman will ever play even a minute in the National Basketball League even with the growth of female youth basketball leagues in recent years. The same could be said for Football, of course, as well as baseball. Golf, on the other hand, seems like a sport where the gender gap would be less of an issue. Golf is a sport where technical skill outweighs physical ability as the most significant factor in determining success.

Women in the PGA 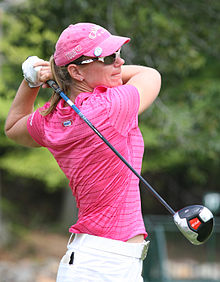 Because of this it would seem that a female golfer could have a good chance competing with male golfers. It has happened before. Back in 2003 the most dominating female golfer, Annika Sorenstam, was invited to play in the Bank of America Colonial tournament in Fort Worth, Texas.  Sorenstam played amid the controversy of being the first female to play on the PGA tour in fifty years. After the first round she led the field in driving accuracy and was ahead of twenty-seven other golfers in driving distance. Despite this, Sorenstam’s putting faltered and she missed the cut.

Even so the LPGA tour might be the most successful female sports league. It has the most storied history (founded in 1968) and manages to attract consistent advertising. Even with the relative amount of success the league has seen it still trails its male counterpart by a large margin.

The most obvious indicator of this is the prize money awarded in each league. In 2012 the total prize money won by the top-ten male golfers far exceeds the top ten female money-winners.

The men made $36 million or almost four times the amount made by the most successful female golfers. The huge difference might be surprising to some, especially those that follow the LPGA tour, but the gap is undoubtedly bigger if the amount of money earned through endorsements was included.

The money-list discrepancy is not a recent development of course. Sorenstam, who retired in 2008 ending her long and highly successful career, set the LPGA tour record for career earnings with a little over $22 million. To understand how impressive that total is on the LPGA tour, consider that the next highest career total is more than $8 million less than that. Sorenstam also earned around $4 million per year through endorsements with Callaway, Cutter & Buck, Mercedes and a few others. 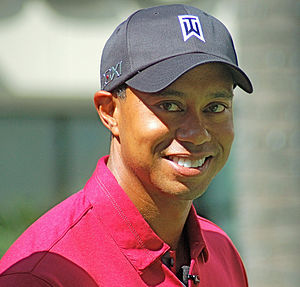 The highest earning male golfer, Tiger Woods, in comparison has earned over $100 million in tournament earnings and many people think he could still be playing for years to come. If that isn’t enough Tiger has earned hundreds of millions of dollars in endorsements. In 2000, Woods signed a five-year $105 million endorsement deal with Nike. At the time that deal was unheard of but it was only the beginning of the many mega-endorsement deals that Woods has signed throughout his career.

Related Blogs:
10 of the Most Frustrating Things in Golf!
Where are the Best Golfers in the World From?

6 Responses to The Sports Archives – Do Male Or Female Golfers Make More Money?