The Sports Archives – The Changing Face of Pro Hockey

Posted on March 16, 2012 by thesportsarchives 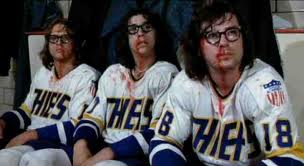 "Old-time Hockey" - What Does it Really Stand For?

Hockey is a unique game in so many ways, but not the least of which is the tendency for its players to periodically take a break from the game itself to punch each other in the head.

This is one of the many goonish aspects of the game which have always been controversial among fans and critics alike. Some argue that the game would be improved significantly if the violent aspects were removed, while others maintain that this physicality is what makes the game of hockey great, and sets it apart from other sports.

There is a growing movement within the National Hockey League (NHL) itself to tend towards a less physical, more skill-based game, whether it’s good for the sport or not. Teams like the Detroit Red Wings and the Vancouver Canucks are at the top of the league’s standings, and they got there by playing a skillful, European-style game which does not rely on tough guys or enforcers.

If the Canucks and Red Wings can show that they have a winning formula, while also reducing the risk of injury to star players, other teams will emulate their systems and the league may change from within, regardless of the rules. There is no better way to institute change than to lead by example.

On the other hand, when Vancouver’s passing game ran into the Boston Bruins in last year’s Stanley Cup Final, they found themselves physically worn down by the Bruins’ hard and aggressive, old-time hockey style. A lot of people think that if Vancouver had an enforcer to protect its stars and shove back, things could have been a lot different.

Ultimately it will be up to the fans to decide what kind of game they want to pay to see and enjoy. If teams can succeed with a different kind of hockey, and in doing so bring in new fans and demographics who may not have been interested in the sport previously, that will be something the NHL commissioner simply cannot and will not ignore.

You never know, another ten years from now it is not hard to imagine disputes being settled more amicably. Perhaps over a mug of beer after the game at a local bar or restaurant. Peaceful and fun time to relax for all – what could be better! A lager for the American team, and perhaps a full-bodied ale for the Europeans.

Composed by the blogging club at http://www.beerclubguide.com, home of microbrew of the month clubs. BeerClubGuide is a consumer reviews site that helps visitors find the very best microbrew beer clubs.