The Sports Archives – Fascinated by Tebow on More Than Sundays

Posted on January 21, 2012 by thesportsarchives

Like him or hate him, Tim Tebow is a polarizing figure. Even after a season of tantalizing fourth quarter comebacks, more people are fascinated by Tebow’s actions off the field than on it. He is a media darling and jerseys that bear his name are the runaway NFL bestseller. What is it that makes Tebow so fascinating on more than just Sundays? 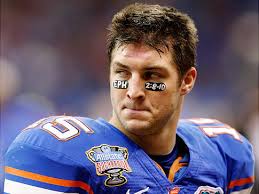 Ever since Tim Tebow entered the NFL after dominating the college game at the position of quarterback, experts have analyzed his abilities. More often than not, the talking heads on sports channels proclaimed there was no way that Tebow could make it as an NFL quarterback. Many even suggested he consider changing positions. This is rooted in the type of offense he ran at Florida during his collegiate career. While Tim made plenty of great throws, especially in the 2008 SEC Championship game against Alabama, he was more known for his rushing ability. Experts doubted his ability to make decisions from under center instead of the shotgun spread that he was so comfortable in at Florida. They also criticized his throwing motion, claiming that he had too long of a release to work in the fast-paced pro game. The controversy about his ability is just one of the reasons people are so fascinated with him. Some want to see him fail, but most are lured in by the underdog story of a guy that everyone says will never make it.

Tim Tebow is famously Christian. Now, he doesn’t really beat the drum, but the media won’t leave him alone about it. When his buttons are pushed, Tim is more than happy to own up to his beliefs in the public arena. His now famous pose of kneeling to pray during critical moments of football games has launched an international craze called “Tebowing.” Some people respect him for his powerful convictions while others hate him for it. In either case, everyone loves to talk about it.

Even in the face of all that criticism, Tim Tebow refuses to say anything negative about the media, his coaches, or the public. Instead, he always insists that he will work harder to get better, no matter what the price. His steadfast attitude is just another element of the Tebow charm that causes people to be fascinated by him. They want to see how much he can take and if he will ever break. So far, there is no sign that he will, but you can rest assured the media will continue to push his buttons, hoping for an outburst.

The Conspiracy – Tebow, the Starter

During Denver’s interesting season, fans frequently called for Tim Tebow to get an opportunity to lead the Broncos. The team’s management seemed to resist this at first, but eventually they succumbed to the pressure and gave the kid a chance. That’s where the conspiracy comes in. A lot of people believe that the Denver Broncos only put Tebow as the starter to try to pacify the crowd. John Elway and company thought that Tebow would fall flat on his face and then everyone would see why it wasn’t a good idea. If the conspiracy theory was true, it backfired miserably. While Tebow had far from a breakout year as a professional quarterback, he delivered in one area. Tebow wins. He took a team headed for a dismal losing season and transformed them into a divisional winner, a playoff contender, and a long shot for a Super Bowl champion. The public is fascinated by this story because Tebow continues to deliver, even in the face of all this angst that is arrayed against them.

Whatever the reason, the public and media show no signs of ending their love affair with Tim Tebow. With an unbelievable overtime win in the first round of the playoffs against the Pittsburgh Steelers, Tim’s legacy is only growing by the minute. If he has enough magic to get by New England in the next round, the fascination with Tim will only intensify. One thing is for sure, though. Tim Tebow will be the same. He will field the usual questions with the same, perfectly crafted answers. Consistency may be the trait that impresses Tebow fans the most.

Watching the game with your buds is a favorite pastime for many guys. For Harrison L., watching the game and taking care of his Japanese Bonsai Tree is a joyful experience. With the information he got from An In-Depth Introduction To Bonsai Trees, he learned how to start and take care of his own collection of bonsai trees.