Posted on November 5, 2010 by thesportsarchives

In the late 19th century there was a DEAF baseball player in the Major Leagues named Dummy Hoy who was unable to hear the umpire calls of pitched balls, strikes and outs.

This paved the way for the use of hand signals by baseball umpires to accompany their calling of the play. It probably also aided players out in the field who could not hear the call, that is before electronic scoreboards were used!

By the way, Dummy Hoy was one of the greatest players of the game and should have been elected to the Hall of Fame.

Read all about Dummy Hoy here. 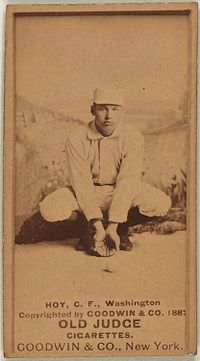