The Sports Archives – Senegal Beats France in the 2002 World Cup

Posted on June 5, 2018 by thesportsarchives 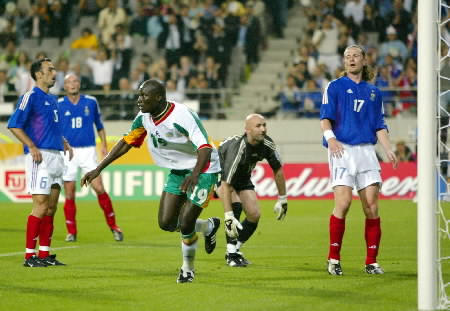 The World Cup is the pinnacle of competition for any soccer player and fan. It is the moment where, every four years, the 32 best teams in the world get to compete for the greatest prize on offer. In 2002, the World Cup in Japan and South Korea was set to begin with a great clash between Senegal and France.

The clash was symbolic because it represented the current World Cup holders, France, getting a chance to defend their title. There were a few players from 1998 who were no longer on the team. But many still were. The likes of Patrick Vieira, Marcel Desailly, Lilian Thuram, Thierry Henry and Fabien Barthez had been there and seen it all. They were in the prime of their careers, and they were among the favorites to win the World Cup again. It is rare that we see a team win back-to-back World Cups, but France were still expected to reach the semis or the final.

However, what no one expected was a 1-0 Senegal win. No one expected this African nation, who had never been in a World Cup before, to get anything but a defeat from this game. In fact, the question among pundits and betters was regarding the number of goals France would score. The world was stunned when the final whistle blew and Senegal had gotten a 1-0 win. They had beaten the defending champions and favorites France – they had gotten a win in their first ever World Cup game.

It was Papa Bouba Diop who got the only goal of the game in the 30th minute. A France response was expected, but it never came. They did attack more in the second half, but it appeared the team had left its spirit at home, as they had no answer for the resolute Senegalese defense.

The trajectory for both teams in that tournament was decided by that first game. Senegal reached the quarter finals, while France did not even make the group stages. It was a humiliating tournament for France, with so many star players who did not deliver an iota of what they could on their best day. And for Senegal and its players, it was a fairytale. Their fans were just happy to get the chance to see the team at such a stage. They were not expecting anything, let alone a place among the best eight teams in the world.

The game is one that soccer fans will always remember. Why? Because it teaches us two lessons about the sport. The first lesson is that simply because we do not know anything about a team, does not mean we should write them off. Senegalese players were not famous until that game, but it does not mean they were lacking in quality. And the second lesson is that if you want to remain the best, you must give it your all in every game. The French players thought their reputations were enough to win that game, but you do not win soccer games on reputation.