Posted on September 25, 2017 by thesportsarchives 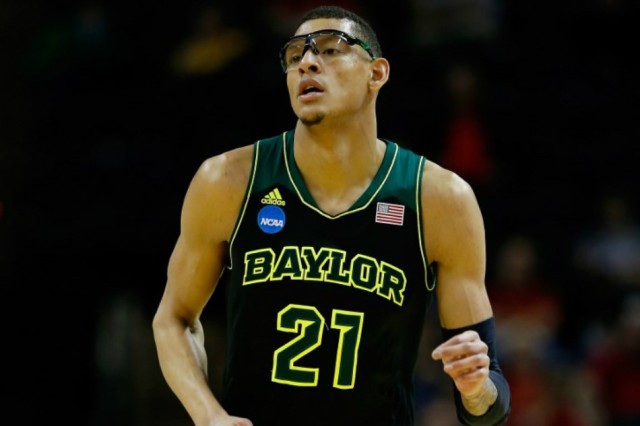 After many considered his basketball career to be over, Isaiah Austin made one of the most improbable sports comeback in history. The 7-foot-1 leviathan product of the Baylor University already suffered vision loss due to retinal detachment, before being overwhelmed by news of Marfan syndrome, days before the 2014 NBA draft.

It seemed that his family’s hopes for him suddenly went crashing after he was ruled out to play basketball. Isaiah, who was, at that time, one of the most renowned college big men, posted monstrous numbers for Baylor (12.1 PPG, 6.9 RPG, 2.4 BPG). It’s a no-brainer that he would’ve been a first-round pick, since almost all NBA teams would’ve drooled over the idea of a shot-blocking center with outside sniping.

But then the 21-year old Austin remained defiant. In an interview with the Associated Press, Austin said, “I’m not going to sit here, and I’m not going to sulk about not being able to play basketball anymore, because I can still be involved with the game somehow or some way.”

Can Austin call the shots for a team? That’s not a valid question anymore, since he was cleared by doctors to play last December of 2016. That gave Austin a second chance to relish and enjoy the sport he truly loves, maybe not as an NBA player for now, but a dominant player in foreign ball clubs or even a country’s naturalized player for FIBA-sanctioned tournaments.

Isaiah started off his comeback last January by signing with Serbia’s FMP Belgrade in the 2016-2017 season of the Adriatic League (ABA). There, he normed numbers of 9.1 PPG, 3.2 RPG, and 1.2 BPG in just 15.6 minutes of action per game. He followed it up by joining China’s Guangxi Rhinos in July.

Now, Austin is being eyed for naturalization by the Philippines, a mad basketball nation. It’s just amazing how miraculous it was for him to go back on the hardcourt, doing what he loves most. Maybe it’s destiny’s way of repaying him for his unwavering fortitude.

What does Isaiah Austin’s story want to tell every sports fan around the world?

That you can treat misfortunes as either excuse or motivator

Austin was rendered blind at the age of 16, but that sort of challenge didn’t prevent him from working extra. He logged longer hours in the gym, devising ways on how to be an effective player despite his limited vision. In the end, his perseverance paid dividends as he was able to use factors like frequent moving, lighting, shadows to help neutralize his foe’s visual advantage.

The same goes for all sports enthusiasts. When you’ve been hobbled by injuries, you can choose to rise or continue lying down. Even if you’re down, you can still do ways to improve your game (e.g., studying rules, reading informative sports articles, etc.).

Setbacks may stop you from dreaming, but if you do so, you’ll never know what could’ve been.

That the game is best played when you have a ‘home’

You read it right. It’s best played when you have an excellent support system – people who’ll stick by your side through rejuvenating wins, and stinging losses. Without Austin’s family and friends, including coaches and advisors, he may have long quitted or retired, but thanks to them, he continued to believe. And with Austin feeling the warm love and support of countless Filipinos, he’ll even grow more.

Why not invite your family over a few of your games? Or play the game together as a form of bond?

And that belief trumps all odds

Austin’s coaches never treated him in a special way, just because he’s half-blind. He was treated like every basketball player with two eyes. They pushed him to his limits and had high hopes for him.

Austin had faith in his skills. He could have switched to other endeavors like coaching, or non-contact sports, but he never surrendered.

The same goes for everyone – sports fanatic or not. If you just keep your head – and faith – above water in trying times, you’ll be able to accomplish things you never imagined you could.

Have Austin’s unfazed courage, and you’ll surely have many ways to go.

Lisa initially started her career as a graphic designer. As her designing career progressed, she discovered that she also has a knack for writing. Lisa faced early hurdles, but never surrendered in her hopes of becoming a full-fledged writer. Today, Lisa serves as an associate writer at writemypaper.io

“I’m jumping in with everything I have, whether I sink or swim, at least I took that leap of faith.”