The Sports Archives – Can Gracie Win The Gold?

Posted on February 12, 2014 by thesportsarchives

An 18-year-old Chicago native is gearing up to become America’s new sweetheart at the Sochi Olympics. Figure skater Gracie Gold, an energetic blonde with blue eyes and signature red lipstick, took first place at the U.S. Championships in January and secured a spot on the Olympic-bound team. Soon after, she was dubbed America’s “face of the games” by NBC, and was named a rising star by Sports Illustrated. Although the favored medalists for the women’s ice skating competition are Kim Yu-Na of South Korea, Mao Asada of Japan and Carolina Kostner of Italy, things are never a guarantee at the Olympics. (Who can forget when newcomer Tara Lipinski robbed veteran Michelle Kwan of the gold medal in the 1998 Nagano Olympics?)

Gracie and her twin sister Carly attended first and second grade in Springfield, MO. One day, they went to a birthday party at the Jordan Valley Ice Park Skating Rink, where they spent an hour on the ice before enjoying cake. Afterwards, Gracie told her father that she wanted to learn to skate. When the ice skating instructor told her parents they should consider private lessons, they found a new coach for her. Gracie loved ice skating so much that she began going to competitions regularly. When Gracie was a freshman in high school, her family moved to the Chicago area so that she could continue her ice skating career.

In 2010, Gracie placed 4th in the novice category at the U.S. Championships. She made her international debut at the Junior Grand Prix in Estonia and walked away with the Gold. Gracie qualified for the 2012 U.S. Championships in the Junior level, winning both the short and long programs in order to walk away with the gold. During her senior international debut, she finished 5th in the world behind Junior Worlds medalist Adelina Sotnikova.

Gracie moved to Los Angeles in September 2013 to train under legendary coach Frank Carroll, who coached Linda Fratianne, Michelle Kwan and Evan Lysacek, who won the men’s Olympic gold medal in 2010. Carroll has added depth, maturity, and grace to Gracie’s performances. “I’m happy to be working with Frank Carroll,” Gold said in a statement released by U.S. Figure Skating. “He’s a wonderful coach. I’m grateful for this opportunity and I am looking forward to the future.” 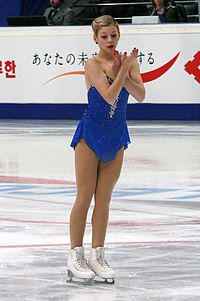 During the 2014 U.S. Championships, Gracie skated away with the gold once again, securing a spot on the Olympics team in the process. There’s now speculation as to whether she can medal for the U.S. at the Olympics. She stated that preparing for the Olympics is like “living out her dream.” Gracie also stated that the most important thing to her is maintaining her passion for the sport. Her father, Carl, said that he is proud of both of his daughters: “They are lovely and kind human beings who I am very proud of,” he said. “I know they sacrificed some things, but Gracie now has that chance to make one of her dreams come true.” While Gracie’s parents and younger sister will be attending the Sochi games, their friends and family—as well as the rest of America—will be keeping up with the coverage from afar. Although most commentators believe that skaters from South Korea, Italy, and Japan will round out the medal platform, there’s always a chance that Gold could come through with a surprising performance. The women’s ice skating events begin airing on February 19 and 20. We’ll have to wait until then to find out what will happen, but it’s guaranteed to be an exciting journey.

Will Chavez is a sports blogger who enjoys covering current events in the sporting world. He’s excited to watch coverage of the Sochi Winter Olympics.

1 Response to The Sports Archives – Can Gracie Win The Gold?