The Sports Archives – The Coolest Trophy Designs In Sports!

Posted on September 12, 2013 by thesportsarchives

Trophies in sports provide validation of a job well done. Whether it’s an individual or team award, the trophy is the tall, heavy, shiny light at the end of the season-long tunnel. They are displayed in stadiums for fans to admire, stacked on shelves of accomplished athletes, and taken on tour as part of the championship parade. Each trophy in the sporting world is different and easily recognizable, and they all carry a powerful significance to the athletes and teams that receive them. Here are the three coolest trophy designs in all of sports: 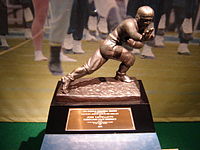 The Heisman Trophy for the season’s most outstanding college football player may very well be the most iconic individual award in all of sports – collegiate or professional. Many of the players that win it go on to have outstanding careers in the NFL, while others fizzle out, never to be heard from again. Regardless of their fate, these players will forever share the fact that they are a part of the exclusive fraternity of Heisman winners.

The trophy itself is designed after former New York University football standout Ed Smith. It portrays Smith cradling a football with one arm and using the other to stiff-arm a not-depicted defender. The Heisman pose is synonymous with excellence and is often used by college and NFL players as part of touchdown celebrations; even most football fans can strike the pose upon being asked to

Most major championship trophies are reproduced each year and handed out to their sports most recent titlist, but there is only one Stanley Cup. Presented to the NHL’s postseason champion, the Stanley Cup stands just shy of three feet tall and is made of 35 pounds of silver and nickel alloy. Each season, the names of the players and coaches of the winning team are engraved onto the Cup’s lower bands, and each player on the team famously gets to spend a day with the Cup, doing with it whatever they please.

To accommodate the most recent crop of champions, a new bottom ring was added after the 2005-06 season. It will likely be the last time a new ring is added as there has been talk of creating a new Cup after the current bottom ring fills up after the 2016-17 season.

More commonly known as the Commissioner’s Trophy, the award for Major League Baseball’s World Series champion is one of the most unique trophy designs in the sporting world. It features a circular base, out of which rise 30 gold plated flags, one for each team in the league. In the center, a silver baseball bulges from the base stitched with 24-karat vermeil and engraved with latitude and longitude lines symbolizing the world.

As of 2000, the trophy is produced each year by Tiffany and Co. It stands two feet tall and weighs approximately 30 pounds. It is presented each season with an inscription of the current commissioner’s signature and the words “Presented by the Commissioner of Baseball.”

While most of us will never get the chance to hoist one of these trophies, we can still marvel in the creativity and majesty of their designs. And remember, just because you’re not a proffesional athlete, that doesn’t mean there’s not a trophy out there somewhere just waiting for you to lift it over your head.

David Cormier is a blogger for EDCO, a leading provider of personalized awards, trophies, and promotional material.