The Sports Archives – Babolat Serves Up Some Hot Hitters!

Posted on September 3, 2012 by thesportsarchives

In highlighting the heavy hitters of today’s tennis world, it was interesting to note several commonalities.

It doesn’t matter if they serve on the Men’s team or the Women’s team; similar factors can play into the success of their game and/or career, regardless of gender.

These particular three consist of Agnieszka Radwanska, Julien Benneteau and Kim Clijsters. These great players have wowed the crowds many times over. So many accolades they can be proud of, all for our viewing enjoyment.

Agnieszka Radwanska is a native of Poland. She began playing tennis at the tender age of 4. Her first victory was in 2005 winning the junior singles title at Wimbledon. She later won the Most Impressive Newcomer Award in 2006 as presented by the WTA. Now at age 23, she has definitely brought her “A” game to the court and has accomplished much at a young age. Her racquet of choice for power is the Babolat Pure Drive. You can’t have an “A” game without an “A” racquet. 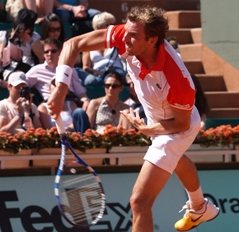 Julien Benneteau is a 30 year old Frenchman. Just as Agnieszka, his female cohort, Benneteau also began playing at the age of 4. At the 2009 Paris Masters, Benneteau probably had one of his best career highlights when he scored a huge upset over top-ranked Roger Federer on his home turf. In April 2012, he ranked ATP World #26. But most currently, he brought home a Bronze Medal in the 2012 Olympic doubles.

It was only a matter of time before 29 year old Belgian player, Kim Clijsters would inevitably become a sports figure , following the footsteps of her athletic-minded family.

Clijsters father was a football player and her mother was a gymnast. She turned pro in 1997. Ten years later she would sadden the crowd announcing her retirement. But fans were pleasantly surprised to have her return two years later in 2009 after her retirement hiatus.

Clijsters also won the Most Impressive Newcomer award just as Agnieszka Radwanska. With three US Open wins under her belt , she has again announced that she will retire after the 2012 US Open.

Recently, a hip and ankle injury have been afflicting Clijsters, sharing the same trials along with Rafael Nadal and Andy Roddick who have also suffered injuries.

The common thread that is stitched across all three of these particular players is their similar sports equipment, the Babolat Pure Drive tennis racquet, to the many shared trophies acquired at premier tennis matches, not to mention their young vivaciousness and excellent techniques out on the court. Coincidentally, all three have their play listed as right-handed, two-handed backhand. Eerie similarities or fun facts?

Dee Adams, who majored in Business, is a freelance writer from San Diego, CA who enjoys covering topics on sports, health and all around good living. Being a tennis enthusiast since 1998 has paved the road for her to embrace the sport that is fun to play and watch.

1 Response to The Sports Archives – Babolat Serves Up Some Hot Hitters!