The Sports Archives – NASCAR: Ones to Watch

Posted on April 25, 2012 by thesportsarchives

NASCAR, the largest stock car sanctioning organization in America, is extremely popular in both the U.S. and Canada. In case you’re new to NASCAR, here’s what you need to know. 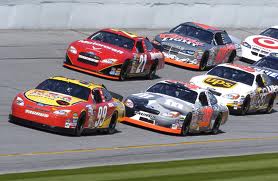 NASCAR is a sanctioning body which oversees many types of racing, including the Sprint Cup Series, Nationwide Series and Camping World Truck Series. NASCAR sanctions more than 1,500 races at over 100 tracks every year. Here’s a summary of NASCAR’s history, if you want to read up on how the organization got its start.

Now let’s get down to the real topic at hand – who are the ones to watch in NASCAR today?

The Enumclaw, Wash. native started the year in the No. 5 Chevrolet for Hendrick Motorsports. He placed seventh in the Sprint Cup Series at Texas Motor Speedway in April of this year, and 3rd in the Nationwide Series at the same location. Later in the month he won in the Truck Series at Rockingham Speedway. He’s got speed and experience and he’s on track to keep working his way up in the NASCAR rankings.

Dillon, the youngest NASCAR Camping World Truck Series champion in series history (he won in 2011), moved to Nationwide in 2012. The grandson of former NASCAR driver and current team owner Richard Childress, Dillon really got noticed by the NASCAR world when he became the Camping World Truck Series Rookie of the Year in 2010. He’s got ways to go but keep an eye on this up and comer. Fun fact about Dillon? He played second base in a Little League World Series when he was younger.

Ambrose currently drives the #9 Stanley Ford Fusion for Richard Petty Motorsports in the Sprint Cup Series. Ambrose won at Montreal in August 2011, his first Nationwide win of the year, just after winning his first Sprint Cup victory at Watkins Glen. Although he’s had some bad luck of late (he ran out of gas at Texas Motor Speedway in April), this Aussie import is due for a big win.

These up and comers certainly have their work cut out for them if they want to compete with those at the top (see current NASCAR rankings). And of course their success isn’t just down to them. Again, if you’re new to NASCAR, you might not know what goes into keeping these drivers’ cars in top condition. For example, the car windshield has to be coated with a special adhesive film that can peel off and be replaced after each race. And during the race? The pit crew is absolutely essential to the success or failure of the driver.

I hope this brief overview of NASCAR and some of its up and comers has you excited for the rest of the 2012 races (check out the 2012 NASCAR schedule). Keep an eye on these youngsters as they continue to make an impact on the NASCAR circuit.

Catherine Halsey writes for a digital marketing agency on a range of topics. This article links back to http://www.safelite.com/.

5 Responses to The Sports Archives – NASCAR: Ones to Watch