Posted on February 6, 2011 by thesportsarchives

One of the greatest moments in sports archives history happened during the AFC Championship Game between the Denver Broncos and the Cleveland Browns on January 11, 1987. This was not one particular play or event, but a series of plays which ultimately led to Denver tying the game.

Denver was trailing the Browns, 20-13 with just over 5 minutes remaining in the game. Led by quarterback, John Elway, they took control of the ball at their own 2 yard line and in 15 plays, spanning 5 minutes and 2 seconds; they mesmerized the Browns defense and marched 98 yards downfield for a touchdown with just 37 seconds remaining on the clock.

The closest the Browns came to stopping them was when they forced a 3rd and 18 after sacking Elway. On the very next play, Elway retaliated by completing a 20 yard pass to the Cleveland 28 for a first down. They completed the drive with an Elway to Mark Jackson 5 yard toss for the score.

Denver went on to win the game in overtime 23-20. The series of plays to tie the game became known as “The Drive”, a great moment in sports archives history. 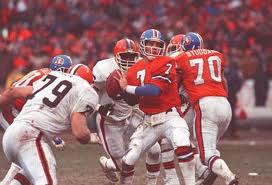