The Sports Archives – The Sport known as “Ultimate”

The modern Frisbee has been around to facilitate athletic activity for several decades. Its popularity base used to be centered in America, but it has since been moving forward and expanding.

Ultimate, or, as it is more commonly known, ultimate frisbee, is a competitive sporting activity whose gameplay revolves around (as one can imagine) the flying disc! The sport is also widely-played on a recreational “catch” level with omitted/alternative rules. In competitive ultimate, a group of players work together to pass the floating disk down a field of play and towards a scoring “end zone”, hoping to accumulate points. This occurs while an opposing team runs defense and interception of the disk, usually while it is in flight. A variety of rules, regulations, and mechanics exist as a part of the modern rendition of this sport to create challenging, balanced, and exquisite gameplay. The sport itself has roots dating back only about as far as the mid-late 20th Century, originating in the modern United States.

History of the “Frisbee” and the Ancestral “Discus” 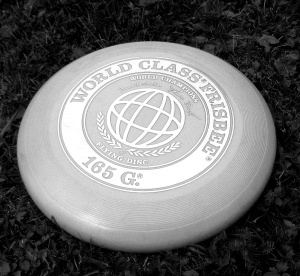 Frisbees have gone through many different renditions and revisions over the past century to refine, stylize and modernize aerodynamic design. Modern Frisbees have a more clean-cut, stylish look to them compared to earlier models.

The modern Frisbee game was created as a part of the “American counterculture” phenomenon of the 1960s, but the disc from which the name is derived came about in a slightly more extensive way. In 1938, a man named Fred Morrison unearthed a business opportunity while tossing a cake pan along a beach with his future wife Lucile. To Morrison’s surprise, a dormant market for flying saucers was apparently waiting to be awoken, and over the next several years, he was able to build a business out of his discovery. World War II threw a momentary wrench into Morrison’s plans, within a few decades, the idea had taken off. Morrison sold the rights to his “Wham-O” flying disc in 1957 and it was appropriated by Richard Knerr who added the brand name “Frisbee” to improve sales.

In design and usage, the modern Frisbee resembles the ancient “discus” in multiple ways. The discus was invented in B.C. times and used in an ancient Olympic event known as the “discus throw.” The modern version of this activity is categorized as a track-and-field event, and involves athletes hurling heavy or weighted discs a great distance. Obviously, Ultimate varies from this sport significantly, but a connection could be made between the disk-like equipment designs that is used extensively in both.

Rules of the Classic Sport

The rules for modern Ultimate can vary, but here are common rules that govern most instances of competitive play:

For more information on ultimate as a sporting phenomenon, check out http://www.whatisultimate.com/ for details.

It is conceivable that some sports savants would believe that the game’s competitive nature is diminished by the lack of nonpartisan, officiated referees, and that the expectation on other players to call their own fouls is inherently devaluing. On the contrary, it is mechanics like this in sporting activities like Ultimate that keep classic sportsmanship and integrity alive in the modern world.