The Sports Archives – ‘Fair Play’ and the Rules of Hockey

In many ways, hockey is one of the most challenging sports imaginable; its rules are similar to those of soccer or American football, requiring players to maneuver a ball (or, in the case of hockey, a ‘puck’) strategically across an arena and into a designated ‘scoring area’ that is protected by a defensive player. Hockey sets itself apart from other sports in sheer difficulty, requiring players to maintain control of the puck solely with a hooked, wooden stick, all while balancing and gliding across a treacherous plain of ice in unwieldy skates! The fundamental rules of play for soccer, football, and hockey all coordinate exactly how the players achieve the simple goal of moving a scoring object into a respective goal area (for example, in soccer, the players may only use their feet to touch the ball, unless they are reinstating it into play from out of bounds), but the players must be permitted to interact competitively with each other if the object of scoring is to be intercepted or protected by either team. This can be achieved in multiple ways and heavily varies with respect to each sport, but the ‘rules of engagement’ surrounding hockey can be among the most controversial, confusing, and downright inscrutable to even the most attentive spectators. 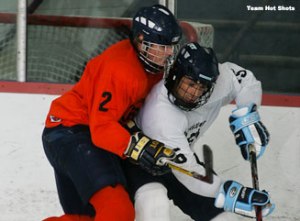 Despite the fact that hockey’s rules of physical contact are highly particular and specific on what or is not allowed, the intuition of even a novice fan is fairly accurate in making judgement calls. Just based on these two images, which example of body checking is more likely to be “legal?”

Most strategies in hockey are simple enough to understand; the flow of each game is fast-paced, similar in fashion to the typical soccer or basketball game. However, the rules regarding physical contact between players is much more similar to football, making hockey a unique hybridization of multiple sporting activities, borrowing select elements from each. Each hockey team consists of a defender titled the ‘goalie’ (named for his sole duty in preventing the puck in play from finding entrance in the team’s goal net), several “defensemen” that head control of the puck when it is on the team’s side of the ice rink, the “center,” who leads the team’s offensive, and the “wings,” which function like wingmen for the center, assisting him in setting up offensive plays and scoring goals. The rules of hockey do not restrict the use of physical contact based on the role of each player, although the offensive players are much more likely to “play rough” than, for instance, the goalie. As with American football, the use of force and physical tactics are effective and, oftentimes, necessary in playing a successful game. However, when sports like football or hockey permit the use of force selectively (the fact that not all types of physical contact are allowed is extremely important) it is not only difficult to make arguments and employ penalties based on excessive or disallowed physical altercation, the fans may be easily misled or confused as to what is allowed “legally.”

There are several prominent terms in hockey that are utilized by experienced players and spectators to categorize or discern specific forms of physical contact from each other. Any type of physical blocking or defensive technique in hockey is as checking, and one of the most common legal forms of this is a body check. The act of body checking is defined as “the use of a player’s body against another player,” and it is permitted only if the player in question was last, or is currently, in possession of the puck. Rules involving body checks are purposefully ambiguous, allowing referees a measurable degree of discretion in deciding on plays. In addition to body checking, other types of permitted defensive blocking include hip-checking, shoulder-checking, and stick checking. Players must be careful, however, that they always check carefully and with ample awareness, lest they get penalized for checking illegally. Some examples of unsafe or illegal checking include “clipping” (the act of knocking an opponent off of his feet by hitting at or below his knees), charging violently at other players, or using the hockey stick as a weapon/deterrent. 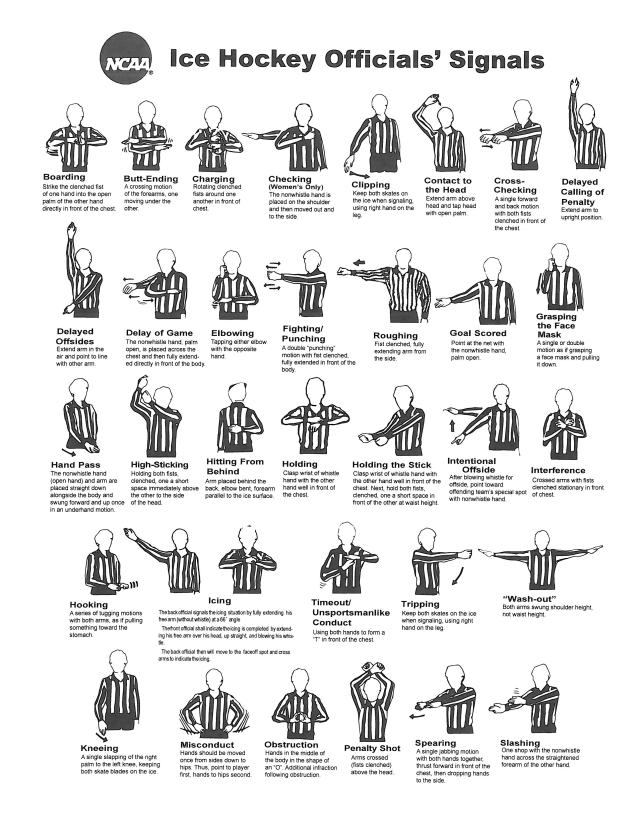 With such a variety of signals, each which carries a specific meaning, even hardcore hockey fans may not be entirely versed in every hand signal.

The penalty box has done well to reduce opponent-inflicted injuries and promote good sportsmanship in hockey. Many spectators postulate that the concept of a penalty box should be expanded into other sports, but there is no evidence that this will come to fruition anytime soon.

If a player checks illegally or is responsible for the injury of another player of the opposing team, it is likely that he will be penalized by the referee. This process is often quite complicated and consists of multiple steps. First, the referee must halt the match in order to make a public announcement of the infraction committed. This is achieved verbally, or with various hand signals. Once the announcement of the infraction has been made, the referee may then institute a penalty against the offending player and/or his team. Most penalties boil down to a ‘time-out’ – a period of as little as 2 minutes or as great as 10 minutes – in which an incarcerated player is removed from play. The consequence for the individual is not necessarily severe, but any time that a player spends in the penalty box is time in which his team must play ‘shorthanded.’ More serious penalties can result in a player or manager’s permanent ejection from the match, though infractions this severe are far rarer than simple misconducts. Nevertheless, even the most minor of penalties can result in the reckless play of a single individual costing a whole team the game. The significance of penalties and safe blocking in ice hockey highlights the importance of good sportsmanship, fair play, and mindfulness of safety in the grand scope of any sporting activity.