Posted on September 7, 2013 by thesportsarchives 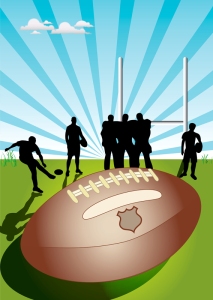 The Rugby shirt first appeared in the 1800s when rugby as a game started to kick off and someone had the bright idea that they needed a way to tell the teams apart. Especially since the earliest uniforms were white trousers with a shirt and bow tie, which may not be seen as the best uniform for a game like rugby. So work started on a more practical uniform which would suit the rough and tumble nature of rugby as well as allowing the players to be comfortable and protected whilst being wearable in both good and bad weather without affecting the player’s game too drastically.

The shape of the Rugby shirt was designed for comfort and practicality; they are closer than other sports attire and have long sleeves and a high neck. This is because rugby players tend to spend a lot of time with parts of their upper body skidding along the ground. They needed to be made of an extremely durable fabric which still had the traits of being breathable and soft so that they did not hurt the skin of the rugby players. So they chose a thick cotton to make their jerseys.

Of course there had to be a way to identify a team individually as the game became more popular and more and more teams were appearing. They chose to use two different colours to a shirt, horizontal stripes were chosen because football was increasing in popularity at the same time. Football tops were given vertical stripes and rugby tops the horizontal stripes and that was the way it stayed.

Rugby shirts then took off like a rocket as a style choice, they were comfortable, durable and the collar gave a certain smartness to them. They were especially popular in America. They soon became a very popular fashion statement worn by people everywhere, whether or not they played rugby, and this was seen as a fad for many years until it just plain didn’t go away. 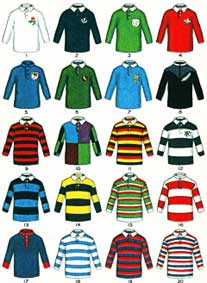 The rugby jersey has now evolved, it is rare that you find pure cotton ones these days but instead they are usually made from a cotton polyester blend. This is useful in the game for a number of reasons the main two being that they do not absorb as much sweat, water, and mud when playing the game but that they can also be made to be tighter and more slippery which makes grabbing a hold of them during a game is far more difficult than it used to be. This is made even more difficult by the tight under shirts worn by rugby players to reduce the amount of sweat that is allowed to soak into the more absorbent parts of their uniform.

The design of the rugby shirt is constantly changing to fit the times, even things as simple as the collar design are changing as the rounded neck is becoming more and more popular. It is an extremely versatile and always popular piece of sportswear which will last throughout the ages.

This blog post was prepared as part of a series which focuses on the number of replica Rugby Shirts that can be purchased.

Related Blogs:
Rugby Boots
What Do You Know About Rugby?
Rugby Sevens – What’s It All About?