Posted on February 27, 2013 by thesportsarchives

People attending concerts and live sporting events often make the mistake of assuming that the seats near the top of the stadiums and arenas are somehow inferior to the rest. This is simply not true. In fact, if you know how to make the best out of sitting at or near the top, your experience can actually be much better than that of the folks who shell out several hundreds of dollars to be close to the fields and stages of North America. Here are five solid reasons that the cheap-seats strategy a very smart approach. 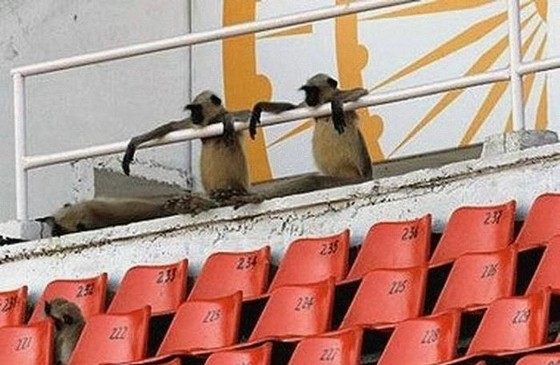 “I told you not to buy the tickets from that ape!”

Perspective of the Action

Much like life itself, sitting in the cheap seats is all about perspective. The classic joke is that sitting in the top rows of any stadium will give you a nosebleed because of the altitude, but outside of the city of Denver that’s not actually a fear. The plain truth is that sitting at the top of the stadium will give you great perspective on the game, the band or whatever you may be watching.

Sitting in the top rows of any football stadium will let you see the plays unfold from an excellent viewpoint, allowing you to understand clearly why some plays are successful and why some are snuffed out at the line of scrimmage. The same goes for basketball arenas, as the sections and rows near the top allow fans to look down on all 10 players on the court at all times, clearly displaying the depth of strategy involved in getting the sphere into the hoop.

View of the City and Crowd

Any live sporting event features a large collection of breaks in the action and commercial time-outs, meaning that the typical fan has plenty of time to explore their surroundings. Sitting near the top of stadiums will allow you to peer out over their edges toward the skylines of the cities they are located in, creating a launch pad for daydreams or just something neat to look at before the play resumes. Sitting near the top will also afford you the opportunity to view the entire collection of spectators. People sitting in the front rows have no idea of the action that is transpiring in the large crowd around them, but folks in the top rows can see all of the crowd-related activities from a bird’s eye view.

Attending sporting events can be incredibly expensive, especially for large families. The best way to cut down on the overall cost is to buy cheap seats in the upper deck, which are often marked down to very enticing rates. A seat in one of the front rows could easily cost a person over $1,000 during the postseason of any major sport, and the overall experience is not necessarily any better, especially if you follow the instructions outlined in this article.

Having seats in the upper portions of any stadium is also a good thing when it comes time to sell them, as cheaper seats are likely to sell much quicker than those priced out of most people’s price range. A ticket that is purchased for $10 can easily be sold for $20, but selling a ticket originally priced at $500 for $1,000 is a much trickier proposition.

The upper deck of any given stadium is never as crowded as the lower decks, and this is a very good thing for people wishing to let their hair down, kick their feet up and relax. The upper deck can be a great place for large families who want to spread out, have conversations and switch seats a few times. The atmosphere is generally a lot less stuffy and pretentious, and you will not be surrounded by people who have anted up a week’s wages in hopes of seeing their team win. Getting in and out of the upper deck can also be easier than getting in and out of other sections, especially in facilities that have escalators or well-placed stairwells.

It has been scientifically proven that alcohol has a greater effect on the human body in higher altitudes. Simply put, this means that drinking beer in the top row is a lot more fun than drinking beer in the front row. It typically takes a grown man of all three or four ballpark beers to loosen up, but the cares melt away even quicker in the upper deck, allowing you to enjoy the event that much more thoroughly. Just be sure that you have a designated driver or clear vision and plenty of time to sober up before you get behind the wheel of a car.

20/20 Institute is the leader in vision correction in Colorado. Their years of experience and top-rated doctors make their offices the most successful and safe places to have your eye examined and get LASIK. Call for a free consultation if you want to know if you qualify for the best lasik in denver.

Five of the Most Expensive Sporting Tickets!
Britain’s Rugby Stadiums: A Brief History