The Sports Archives – Volley for Serve Down Under!

Posted on August 24, 2012 by thesportsarchives

Volley for Serve Down Under

For over a century, the Australian Open has thrilled tennis fans from all over the world. As the first of the four Grand Slam tennis events, it is the initial showcase for newcomers and veterans alike. This year will be no different for the Aussie Open. 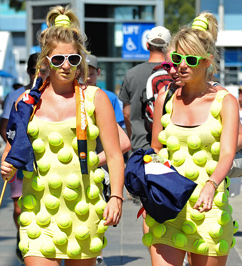 Of course, the reigning champion, Novak Djokovic, will be there, as will runner-up Rafael Nadal. In addition, the newly minted Olympic champion, Andy Murray, and the revitalized, four-time champion, Roger Federer, will pursue the championship cup.

On the women’s side, the competition will be just as exciting. Defending champ, Victoria Azarenka, will have to hold off the likes of Maria Sharapova and Serena Williams. There will be dozens of other matches to determine the winners of the double and mixed-doubles competitions as well as a gala and charity tournament.

The tournament is held every year during the last two weeks of January at Melbourne Park. This year, the dates of the tournament are January 14-27, 2013, which lays it right in the middle of the Australian summer.

The main stadium is named after Australian tennis great, Rod Laver. It holds just under 15,000 fans but there is also a large-screen, hi-def TV in the area known as Garden Green so you can still catch the action. In addition, there are a number of show courts where you can enjoy the match while lounging in the Australian sun on a blanket of green grass.

700,000 tennis fans are expected to attend in 2013, making it the second largest-drawing tennis tournament in the world. While there will be people from almost every country at the tournament, the atmosphere is decidedly Australian. No country embraces sports, sportsmanship and the outdoors like this island nation. And the Australian Open brings them out in force to see some of the best players that the sport has to offer.

Two weeks may seem like a long time to watch tennis. Luckily, the city of Melbourne and the rest of the country offer a wealth of dining, entertainment and sight-opportunities. Melbourne is a city of over 4 million and is lucky to be one of the few places in the world blessed with a Mediterranean climate. Both factors combine to create a cosmopolitan city with an emphasis on the outdoors. In short, there is never a shortage of things to do, inside or out, in this fantastic city while you visit the Aussie Open.

Patrick Whalen is a part of an elite team of writers who have contributed to hundreds of blogs and news sites. Follow him @2patwhalen.

1 Response to The Sports Archives – Volley for Serve Down Under!