The Sports Archives – A History Of African American Swimmers!

Posted on March 14, 2013 by thesportsarchives

African Americans have a long history of participating in and excelling at sports competitions throughout the world. Black athletes have kicked ass in sporting events ranging from local, small town basketball games, to internationally viewed Olympic competitions. Almost everyone who knows anything about black athletics is familiar with the case of Jesse Owens and his quadruple gold medal win during the 1936 German Olympics. He irritated the heck out of Hitler, went down in history and gave African American athletes everywhere reason to be proud.

What about African American Swimmers Though?

Let’s go a ways back into history and take a look at the roots of African American involvement in swimming. We can start with how the European explorers and colonists of Africa noticed that black slaves were highly skilled swimmers, and with tragic consequences. Sure enough, a short while later, many of these slaves were imported to the new world and exploited for their diving and swimming abilities. They were forced to extract sunken treasure and pearls from the sea bottom in places such as the Caribbean Sea.

These kinds of things continued onwards throughout the colonial period and right into the 1800’s. After mid-19th century emancipation, Jim Crow laws followed with their decades of institutional racism that made it difficult for blacks to even find places to swim, let alone join competitive swimming events. Furthermore, segregation of beaches and swimming pools made finding a place to dive in even harder. The end result was a large scale excision of African American involvement in competitive aquatic events and a running prejudice that blacks weren’t much good at swimming and water sports.

Nonetheless, where there is a will to excel at something, some people will find a way, and so a number of black athletes did over the decades, and continue to do so today in increasing numbers.

It was an African American swimmer who first caused the term “Underground Railroad” to be coined thanks to his own escape. In 1831 a fugitive slave by the name of Tice Davids leapt into the Ohio River while being chased by his owner. The former master, trying to catch up in a small boat, lost sight of David’s and assumed that he had drowned, later reportedly commenting to a local newspaper that his former slave had caught the “Underground Railroad” to his fate.  Davids however, later showed up very much alive and free in Ripley, Ohio.

Moving forward through American history to the exploits of successful black sport swimmers, we have the case of Nate Clark, who was the first African American swimmer to score in an NCAA final at Ohio State University in 1962 in the 200 yard butterfly. Of course he wasn’t the first black swimmer to gain some fame, since Andrew Young, a black collegiate scholarship swimmer at Howard University between 1952 and 1956 later went on to become a U.S ambassador in 1976. To this day, Mr. Young stays active in the Georgia swimming community.

Another African American swimming milestone was also set in 1975 by Fred Evans of Chicago State University when he won himself first place in the 100-yard breaststroke during the NALA National Swimming Championships.

African American Swimmers During the 80’S And 90’S

Black American athletes continued making inroads into competitive swimming during the 1980’s and 90’s.  In 1981, Charles Chapman became the first African American to cross the English Channel. This remarkable swimmer braved cold water, ocean currents, long distance and the possibility of bad weather,  ultimately showing that an African American swimmer was just as capable of successfully making such a swim as any of the previous white contenders. Next on the historical list is Chris Silva of UCLA. This determined young swimmer was the first black American to get chosen for an American national team, which later went to compete at the World University Games in Edmonton, Canada. Sadly, Chris Silva, who was from Los Angeles and had been team captain at the University Games, died in a car accident just a little while after he returned from Canada.

Focusing now on women’s accomplishments, we have Sybil Smith, who became the first black female swimmer to score in an NCAA event in 1988. Aside from Sybil, there is also Alison Terry’s drafting as a competitor in the Pan American Games in 1999; it was the first drafting of an American black female athlete into a national swimming team competition.

The height of African American swimming accomplishments arrived at the beginning of the 2000’s, showing as clearly as anything that the old racism laden stereotype of black inability to swim is slowly but surely fading into the background where it belongs.  Right at the start of the new millennium, in 2000, Anthony Ervin of the University of California made it into the U.S Olympic swimming team and managed to score not only a gold medal for the 50 meter free, but also silver in the 400 free relay during the Sydney Games.

This accomplishment was followed by the induction of two black team members into the U.S Water Polo Team that went on to compete at the Athens Olympics in 2004. Women are also included in the accomplishments for the first decade of 2000. In 2004, Maritza Correia both made the U.S Olympic swimming team and caught herself a silver medal in the 400 free relay in Athens.

The best comes last (so far) for African American swimming achievements. Cullen Jones, an athlete from the Bronx who later studied at North Carolina State University managed to become the third athlete ever to join the U.S Olympic Swimming Team.  In 2008, at the Beijing Olympics, Cullen not only won the gold medal for his participation in the 400 relay, but also got the gold by breaking a world record. In 2009 he went on to break an American record at the U.S National championships for the 50-meter freestyle. 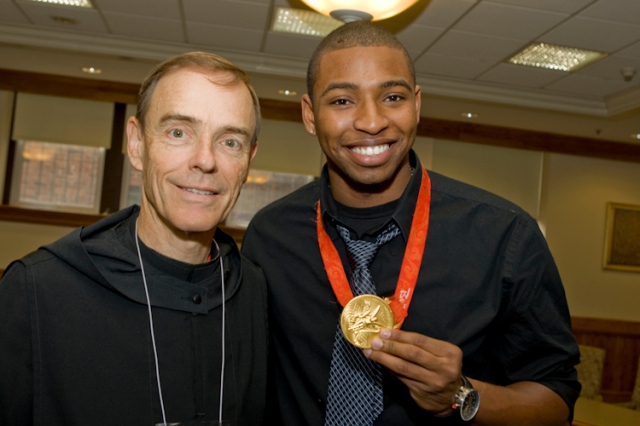 As time goes on we are undoubtedly going to see only increased participation in water sports as more African Americans start participating in what used to be a rare sight. This is an excellent trend that can only help benefit both young athletes of all races and the black community itself.

About The Author: Shawn Tremaine is a personal trainer and health and fitness writer, and has reviewed sites like Mind Body Mojo. When he’s not working on helping others increase their health, he likes to spend it coaching his little boys soccer team.

Related Blogs:
The Two Most Famous Runners to Have Won Gold at the Olympic Games!

2 Responses to The Sports Archives – A History Of African American Swimmers!