The Sports Archives – A Brief History of the Baltimore Orioles

Right, a common emblem of the Baltimore Orioles. Left, the real bird from which the team’s colors and mascot came.

Orange and black has taken to the field! No, it is not the sporty mascot of Kellogg’s Frosted Flakes, Tony the Tiger. It is none other than Baltimore’s resident Major-League Baseball team, the Baltimore Orioles! Yet, despite its name and reputation in today’s sports, this American-league team was not actually founded in Baltimore, nor was it nationally represented via one of Maryland’s most renowned birds. Indeed, to uncover the full history of the Baltimore O’s, one has to delve slightly deeper into the history of America’s official pastime…

Before the O and B

Before becoming the Orioles, they were known as the St. Louis Browns. Before that, the Milwaukee Brewers. This baseball team certainly has born many names in its history!

The modern Baltimore Orioles baseball team actually started in the minor Western leagues in 1894 as the “Milwaukee Brewers” (not to be confused with the modern-day baseball team of identical name). At the turn of the 20th Century, the Western League reinvented itself under the title of “American League” and became a competing league in U.S. baseball. The Brewers managed to hold on where many of its sibling teams from the old Western League could not. The “baseball civil war” between the American and other baseball leagues continued, and a short while later, the team was moved to St. Louis.

In its new Missouri hometown, the Brewers team adopted a new title and color scheme, the “St. Louis Browns.” The Browns performed quite well in the American League for decades to come, challenging many rival teams and even pressuring the New York Yankees over a pennant in 1922. During wartime in the 40s, baseball at home persisted, bearing the weight of responsibility to keep spirits up in the U.S. The Browns certainly contributed to preserving American culture on the world stage in the mid-20th Century, but in 1953, and after deliberation, the Browns were moved from St. Louis into their current home in Baltimore, Maryland. The Orioles debuted a year later, sporting orange and black on the field of play and a brand new attitude in modern baseball. 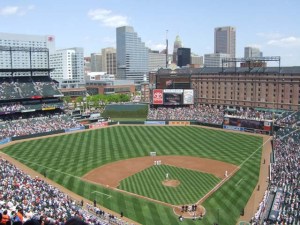 Camden Yards, home of the Baltimore Orioles since 1954!

Since 1954, the Baltimore Orioles have truly made a name for themselves in Major-League Baseball, achieving 3 World Championships, 6 Pennants, and 12 Playoff Appearances exclusively under the banner of the black-and-orange bird. With the team’s victories as the St. Louis Browns factored in, these numbers bolster to 7 Pennants and 13 Playoffs, respectively!

2016 in particular is shaping up to be an extraordinary baseball season for the Baltimore ‘O’s’. With a 26-16 Win/Loss ratio, the team is presently featured in 1st place for the American League East DSt. Lousiivision and also boasts most home runs in all of the American League. With 191 accumulated runs and a win rating of about 62%, the Orioles certainly have a shot at the World Series this year, at least for now. The Orioles have not played in the World Series since 1983, when they took home victory against the Philadelphia Phillies. In its history as the Baltimore Orioles, the team has claimed 3 World Series wins and numerous other matchups in the American League Championships and Division Series.